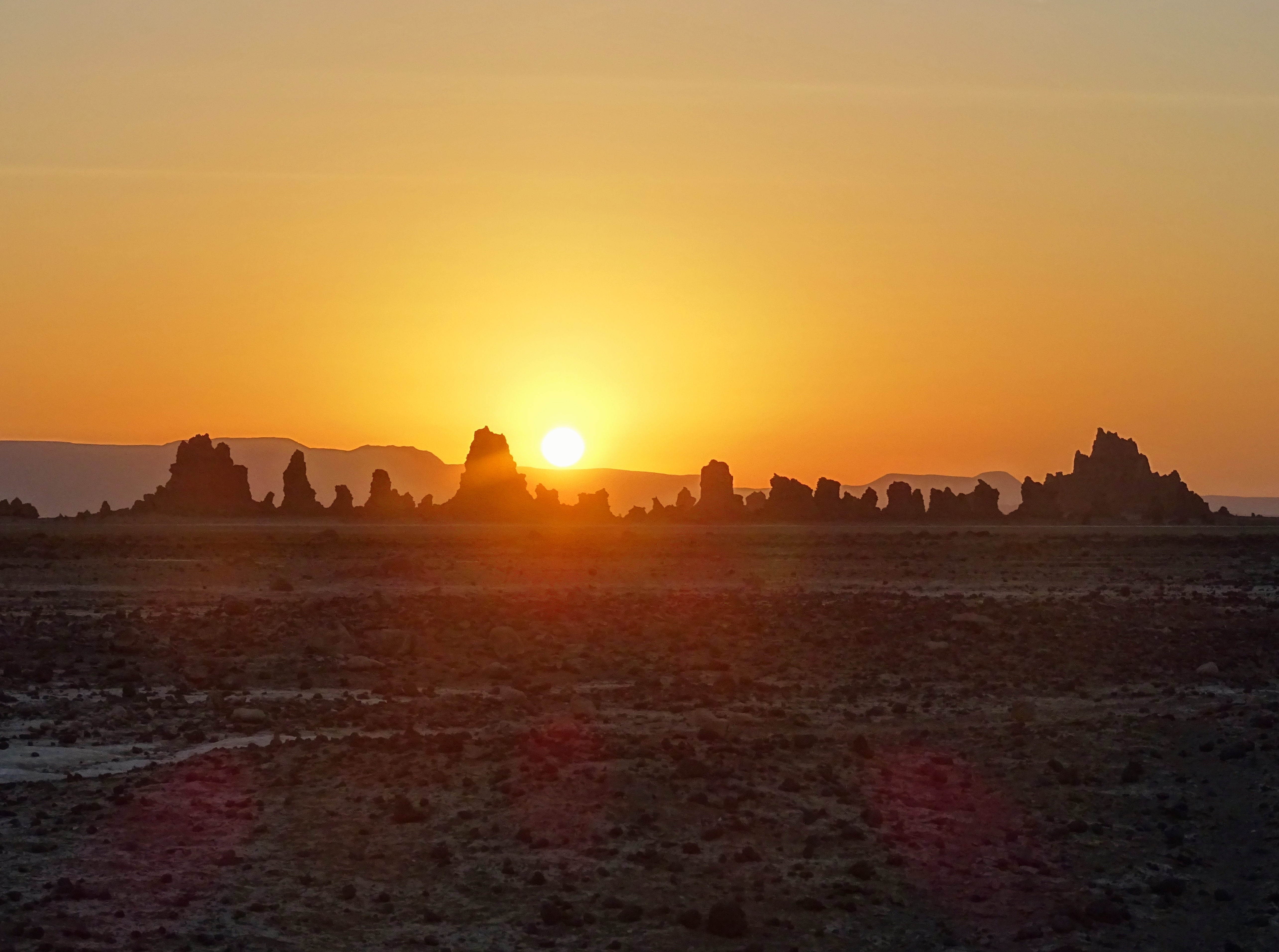 Djibouti is one of Africa’s smallest countries.  Located in the Horn of Africa between Ethiopia, Eritrea and Somaliland, it has just 850,000 inhabitants.

It used to be a French colony, but in 1977 became independent.  Alongside Arabic, French is still an official language and there’s a clear French influence in the country’s cuisine. 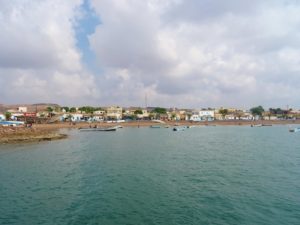 Djibouti’s strategic position near some of the world’s busiest shipping lanes and at the entrance to the Red Sea means it’s an important port for refuelling and transhipment.  Several countries, France, the USA, Japan and Germany, have naval bases here. 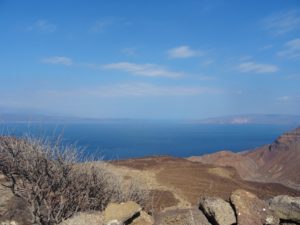 Looking eastwards across Lake Goubet, an inlet from the Gulf of Tadjourah

Like many places that are a bit off the beaten track, Djibouti has few tourists.  This is a pity because the country has some fabulous natural features.

Straddling the country’s western border with Ethiopia is Lake Abbe.  It lies in the Afar Depression, a point in the Great Rift Valley where three plates of the earth’s crust are pulling away from each other.  This geologically active zone includes the volcano Erta Ale. 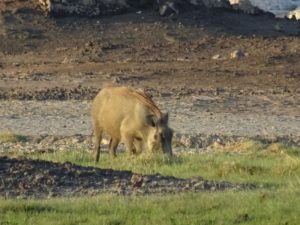 A water hog at Lake Abbe

Lake Abbe is fed by the waters of the Awash, one of Ethiopia’s main rivers, but lower rainfall and Ethiopia’s use of water from the Awash for irrigation have seen the lake’s water levels drop over the years.  Between 1940 and 1984, the lake shrank by two thirds. 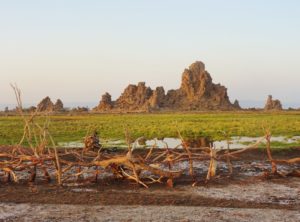 There are no rivers leading out of Lake Abbe: any water loss is through evaporation, so as the lake has shrunk the water has become increasingly saline.  Today, it is surrounded by large salt flats beyond which extends the desert as far as the eye can see. 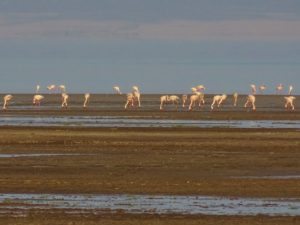 Lake Abbe’s large flocks of flamingos are now much reduced

Where once wildlife flourished, now only a few gazelles graze on the grass by the lake’s shrinking shores and small flocks of flamingos wade in its shallow waters. 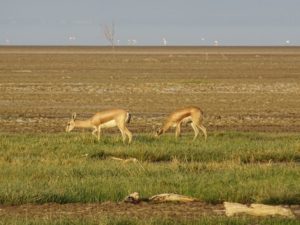 Gazelles grazing near the shores of Lake Abbe

Not far from Lake Abbe are strange rock towers – limestone chimneys.  Reaching up to 50m, from afar these bizarre natural features look like the ruins of some lost civilisation. 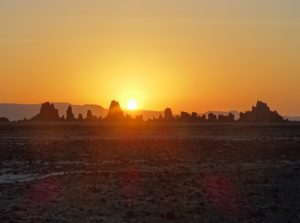 Sunset at the strange natural chimney formations near Lake Abbe

Plumes of smoke drift out of some, while geothermally heated water bubbles from the base of others. 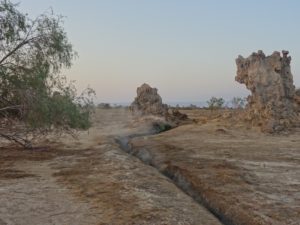 Geothermically heated water bubbles from the ground at Lake Abbe

Lake Abbe is rather remote but the area is not uninhabited.  A few Afar people live here and there are a couple of villages in the expanse of desert between the road and the lake. 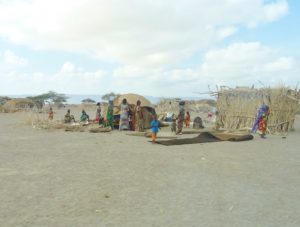 On the other side of the country is Djibouti’s second great lake, Lake Assal.  At 155m below sea level, it is the lowest point on the African continent. 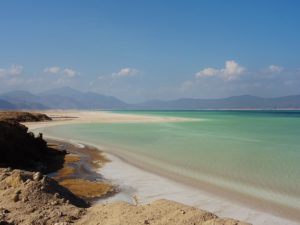 Rather like the Dead Sea, the lake’s water is so salty that you can easily float in it.  Its shores are not of sand but of hard, white salt. 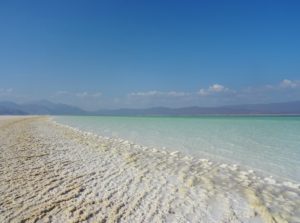 The shores of Lake Assal are of solid salt

For years, locals have harvested the salt on a small scale, but the government in Djibouti City has agreed a contract with China for industrial-scale mining.  It’s difficult to see how this will be possible without damaging the natural beauty of the lake and the surrounding area. 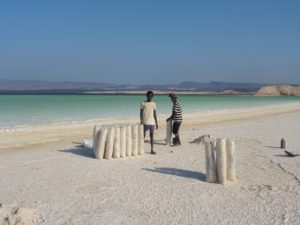 Much of Djibouti is made up of desert or mountains, so I was keen to see one of the country’s small patches of forest by way of contrast.

Nestling in the mountains north of the Gulf of Tadjourah that cuts deep into the country, the Forest of Day covers some 140 square kilometres. 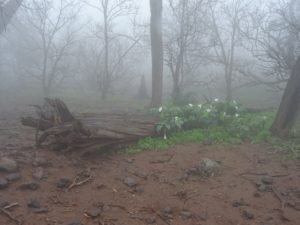 It’s a national park and includes an important stand of East African junipers.  It is also home to the Djibouti francolin, a type of partridge.

It was a slow and very bumpy drive up the windy road to the forest.  By the time we finally arrived at our small hotel, it was night time. 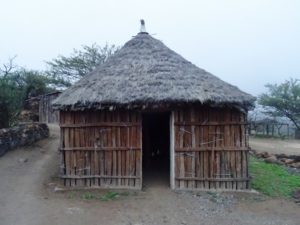 The next morning, the forest was shrouded in mist.  The outlines of the bare trees made it look like a scene from a horror movie.  Even so, the forest had an eerie beauty. 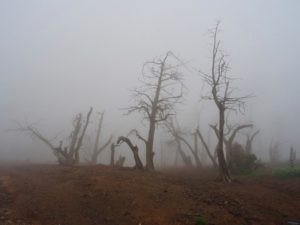 Even though the Forest of Day had a strange beauty, it was obvious that many of its trees were dead

But it was obvious that many of the trees were dying, though from what was not clear.  As we were leaving, we heard a francolin calling through the mist.  For how much longer would this endangered species of bird survive in this decaying habitat, I wondered?

Djibouti has some wonderful natural features.  It was sad to realise that three of the country’s main attractions are all threatened in one way or another and that the beauty I had seen might soon be lost or blighted forever.