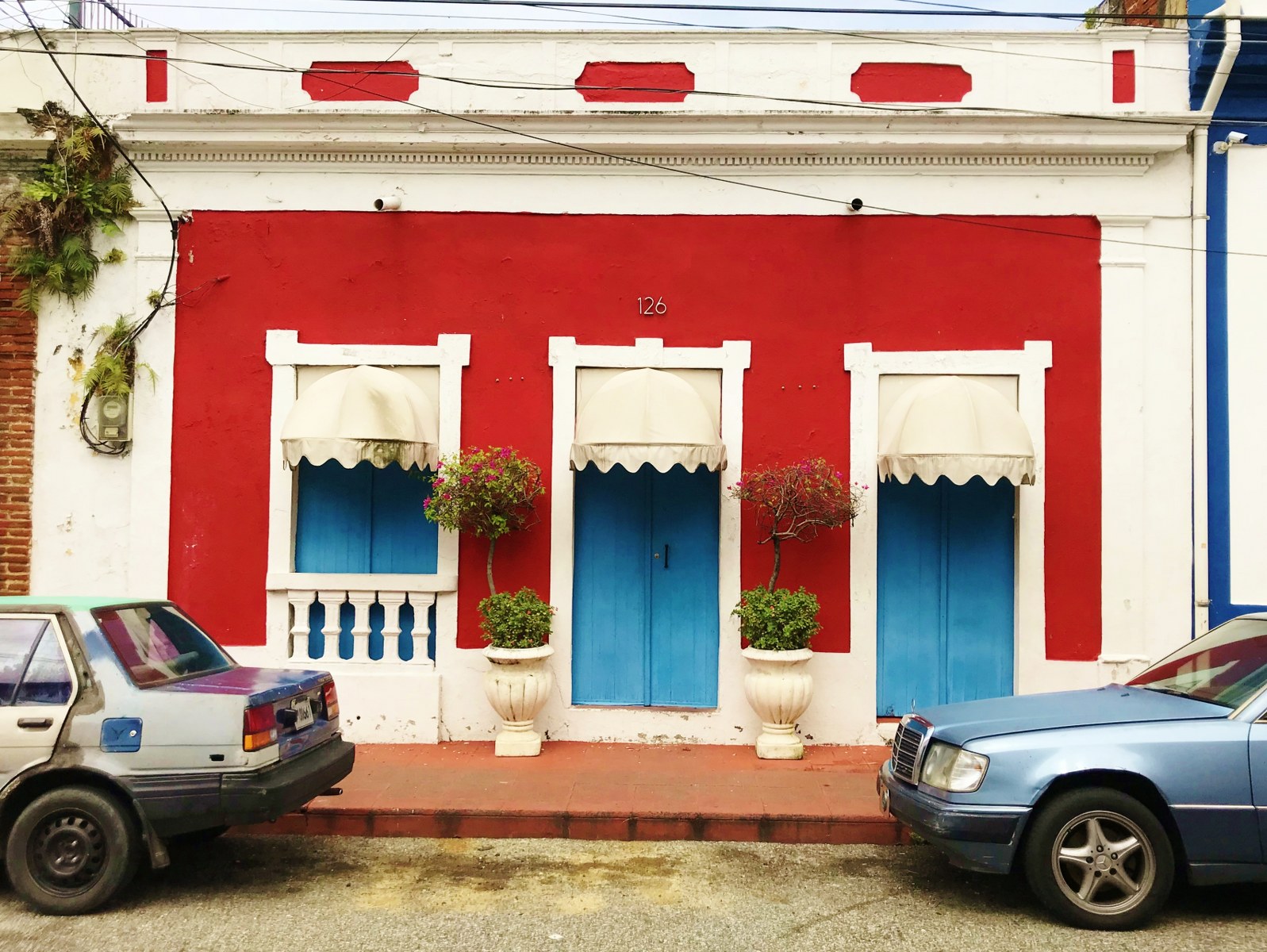 The Dominican Republic is renowned for its white sandy beaches, palm trees and sparkling blue seas.  For visitors from North America and Europe it can offer the quintessential Caribbean experience.

Yet, as I discovered, there is much to see and do beyond the confines of the all-inclusive resorts for which the country is renowned.

My trip focussed on horse-riding through the countryside of the Samaná Peninsula in the north of the island. 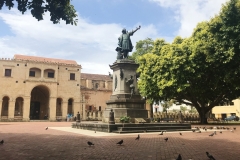 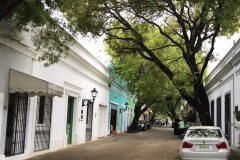 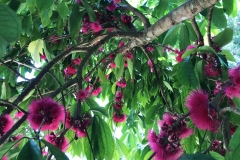 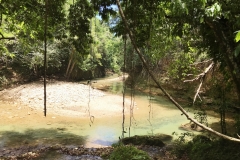 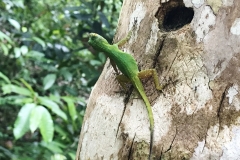 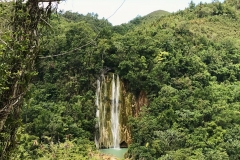 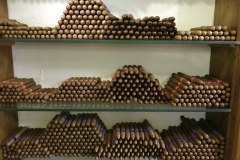 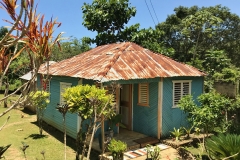 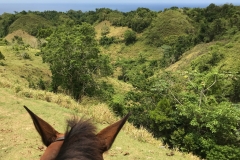 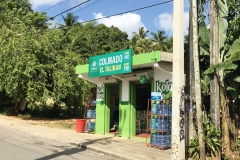 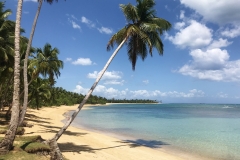 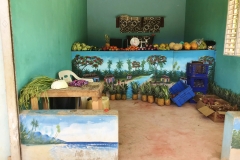 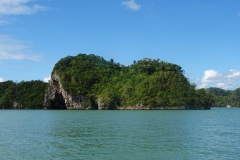 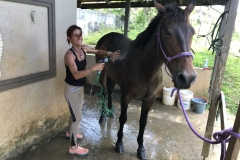 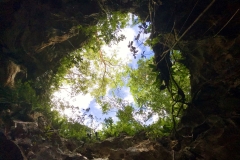 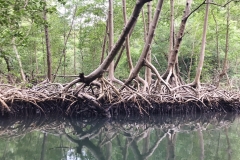 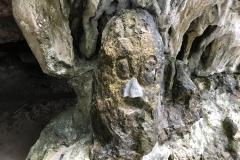 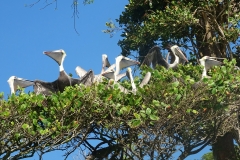 Riding quietly along country paths and through woodland was a great way to observe nature at a leisurely pace.  And, as we passed small holdings and farms, I got a glimpse into rural life and a world very different from that of the big hotels on the coast.

During my visit I also learned about the country’s history and culture.

The Spanish-speaking Dominican Republic shares the island of Hispaniola with French-speaking Haïti to the west.  The island is the second largest in the Caribbean after Cuba.

It was here in 1492 that the Italian explorer Cristobal Colón – known in English as Christopher Columbus – landed, believing he had found a sea route to the East Indies.  His discovery was to be the start of European’s colonisation of the Western hemisphere.

Colón’s voyage had been paid for by the Spanish crown, so he called the newfound territory La Isla Española – the Spanish Island – a name that evolved into Hispaniola.

The jungle-covered island was home to the Taíno  people.  When Colón arrived, there were five Taíno kingdoms on Hispaniola, with a total population of about 750,000.

In 1493, Colón’s brother Bartolomeo arrived with a contingent of 1300 Spanish men and began colonising – the word derives from Colón – the island.  They enslaved the indigenous people, making them work on farms or in the search for gold.

The Taínos’ immune systems had no defence against the diseases the Europeans brought with them.  Together with harsh slavery conditions, within 20 years of the Spanish arriving, there were only 26,000 Taíno; after half a century, there were only 500.

Cristobal Colón founded the settlement of Santo Domingo.  Today, the city is the capital of the Dominican Republic and with three million inhabitants is the largest city in the Caribbean.

It is the oldest permanent European settlement in the Americas and features many historic buildings.  In 1990, UNESCO declared its Zona colonial – or colonial quarter – a World Heritage Site. Today, visitors can explore its grid-pattern streets with their churches, museums and traditional houses.

Hispaniola’s wildlife did not fare much better than the Taíno.  The European settlers brought cats, rats and mongooses.  The new arrivals wrought havoc with many of the smaller indigenous animals.  Soon, all but two of the island’s native mammal species were wiped out.

The two surviving species are the Hispaniolan hutia (a medium-sized rodent) and the Hispaniolan solenodon (a sort of shrew the size of a cat).  Both are found here and nowhere else and both are threatened with extinction.

Despite the loss of many species, there are still almost 500 types of vertebrates (mostly birds) living among the island’s bushes and trees and in its waters.  And, although much of the original forest has been cleared for farming or replaced by new growth, there are over 5600 species of plants.

The Dominican Republic has both the highest mountain in the Caribbean – the 3098m Pico Duarte – and the region’s largest lake and lowest point – the extremely salty Lake Enriquillo – which lies 40m below sea level.  The differences in altitude are one reason the country has such a diverse range of landscapes, from semi-desert to dense jungle.

Most of the countryside I saw riding on the Samaná Peninsula was forest or farmland.  I was based near the small and colourful coastal town of Las Terrenas.

I was surprised to find that many of the bars, shops and restaurants there had French owners and staff.  Apparently, in the 1980s a Frenchman moved there and liked it so much he encouraged friends to join him.  There was a snowball effect and today Las Terrenas even has a French school.

The stables were located in the hills above the town.  The horses were well cared for and a pleasure to ride.

Each day, we would take a different route, riding through a mixture of lush forest and open fields.

We rode past small, brightly painted cabañas with bougainvillea growing up their sides and children playing outside.  Sometimes, dogs would dash out, barking and wagging their tails.

One of our rides was along the beach, where we had the opportunity to take the horses into the sea.

The area around Las Terrenas is hilly.  The horses were sure-footed, but in some parts the paths were so rocky and steep we nevertheless had to dismount.

Although primarily a riding trip, I also had the opportunity to visit the spectacular Cascada Limón waterfall in the centre of the Samaná peninsula and Los Haitises National Park on the southern side.

Much of the national park is covered by subtropical jungle, with mangrove swamps lining parts of the coast.  Visitors can only access the park by boat and once on land are restricted to a few areas near the shore.

The park gets its name from the distinctive landscape of conical hills.  The word ‘haiti’ means highland or mountain range in the Taíno language.

Petroglyphs painted by the Taínos can still be seen on rocks and in caves in the park, but with the tourists’ breath raising humidity levels in the caves, even these are threatened.

I was impressed by the diversity of the Dominican Republic, even though I saw only a fraction of what it has to offer.  Exploring it on horseback was an added bonus and enabled me to see it from a different perspective.

My tailor-made trip was organised by Far and Ride and the local stables providing the horses and guide was Hacienda La Suerte.