White Turf is a unique winter horseracing event.  It takes place every February on the frozen lake at the Swiss mountain resort of St. Moritz.

Held each year since 1907, White Turf now attracts over 30,000 visitors.  The races take place over three consecutive weekends against the spectacular backdrop of the Engadine Mountains. 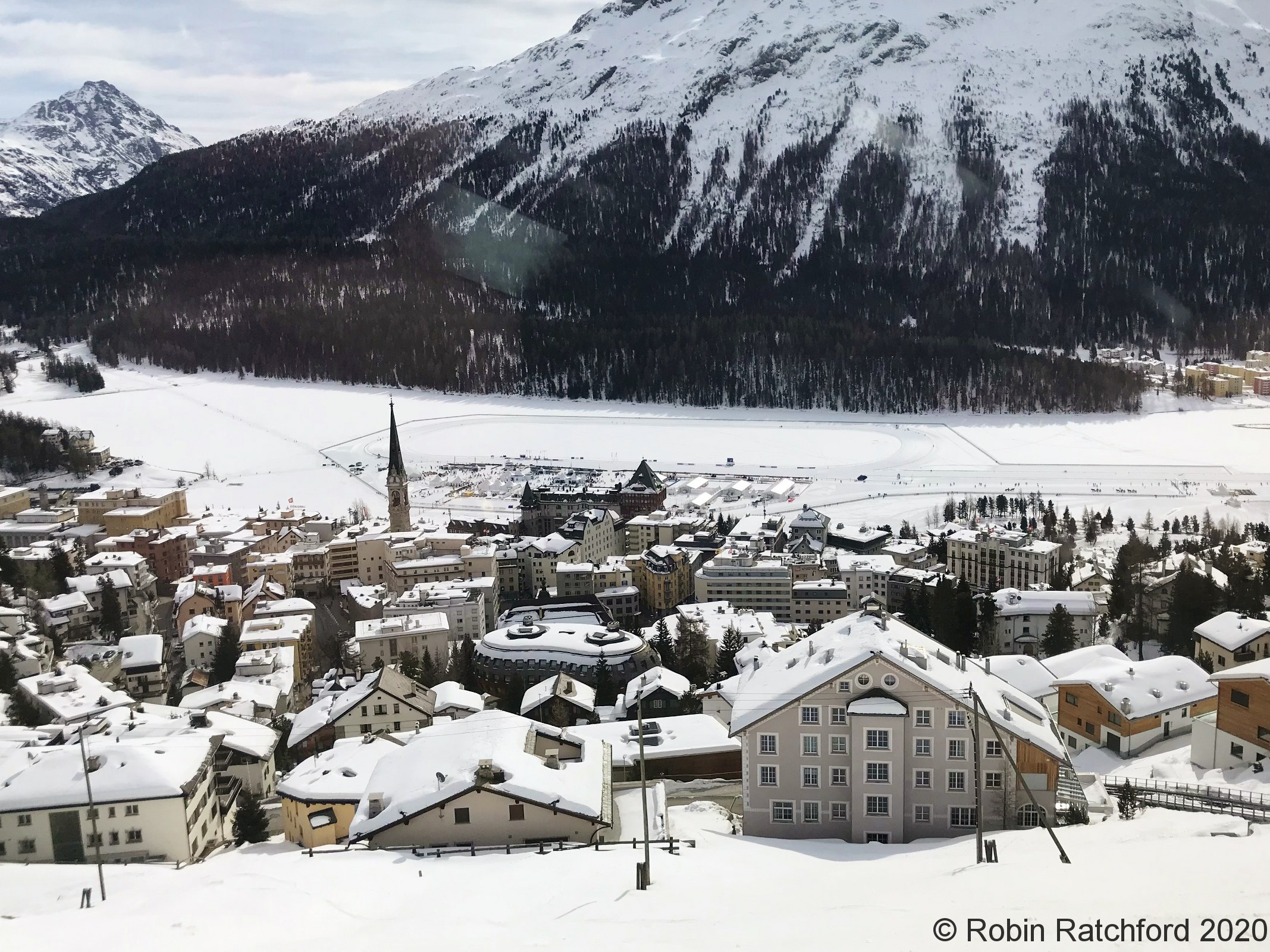 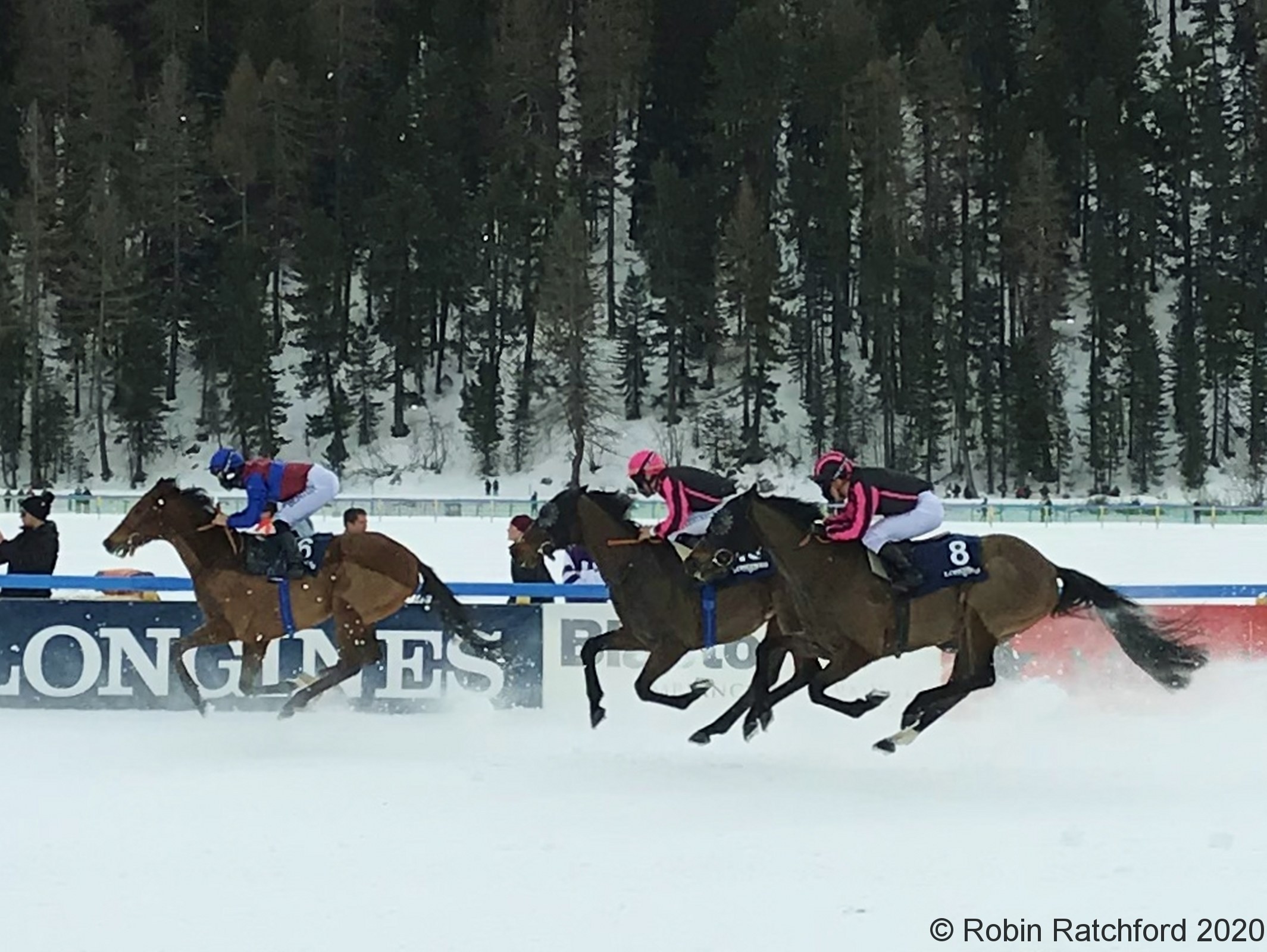 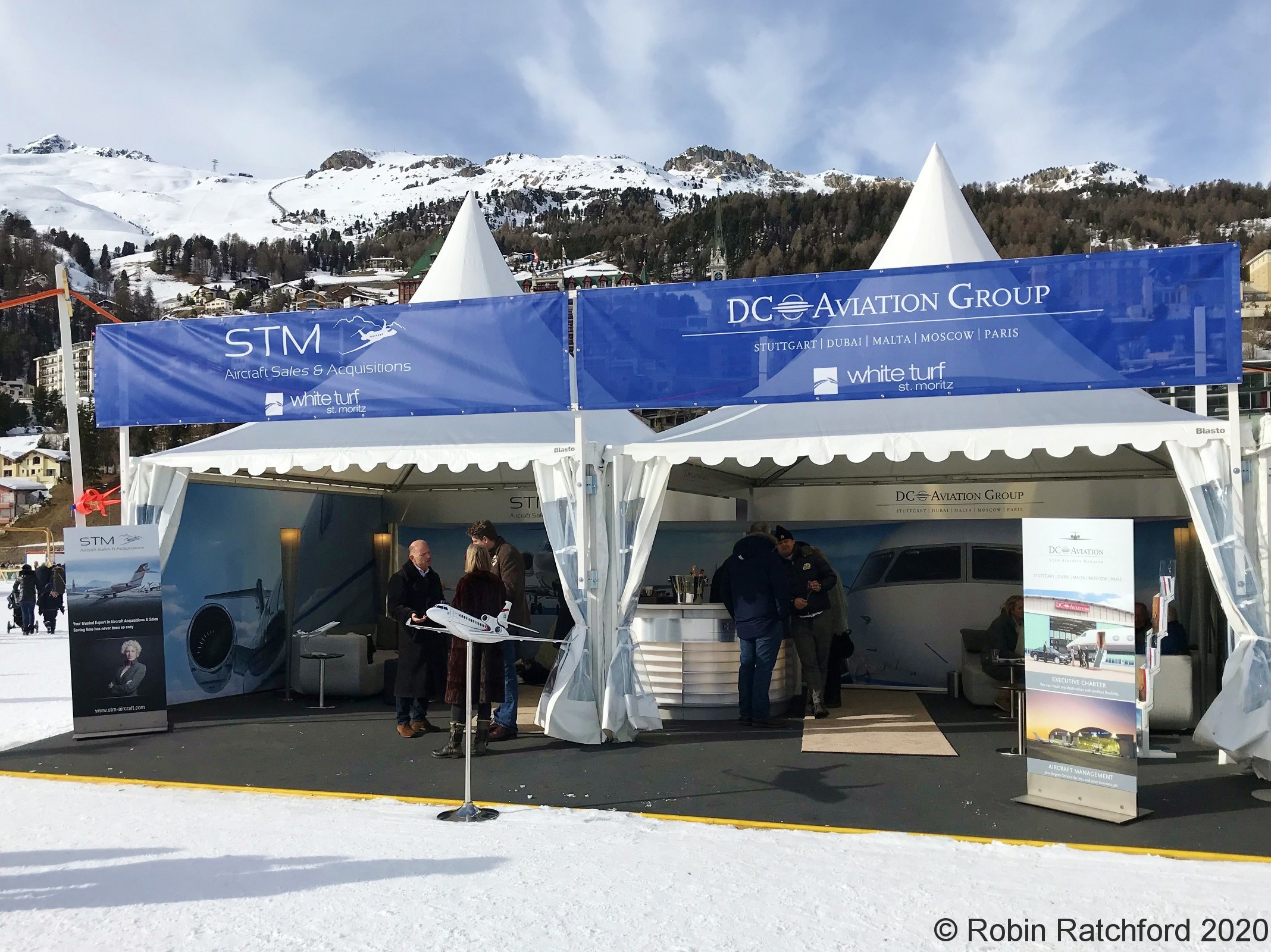 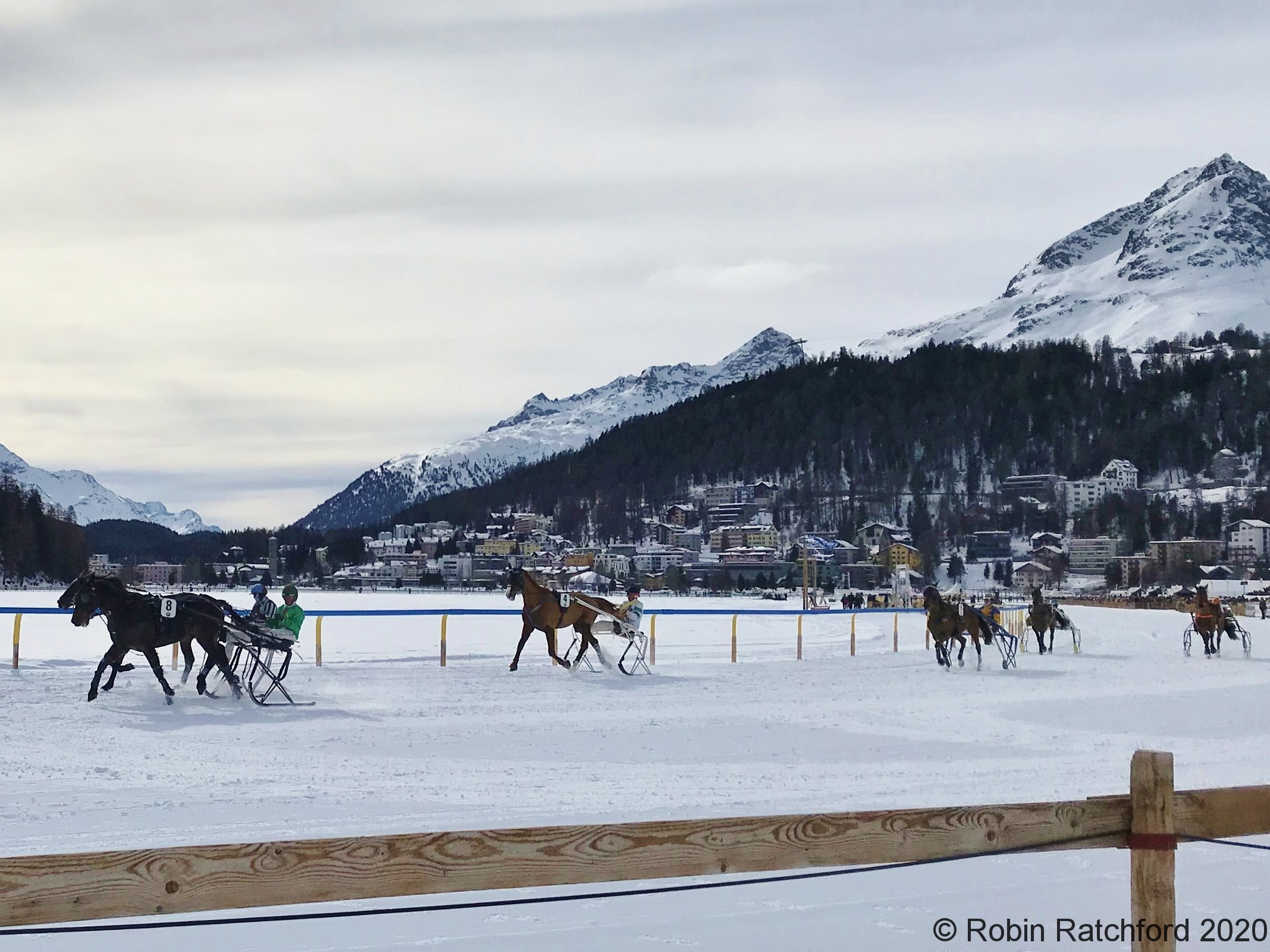 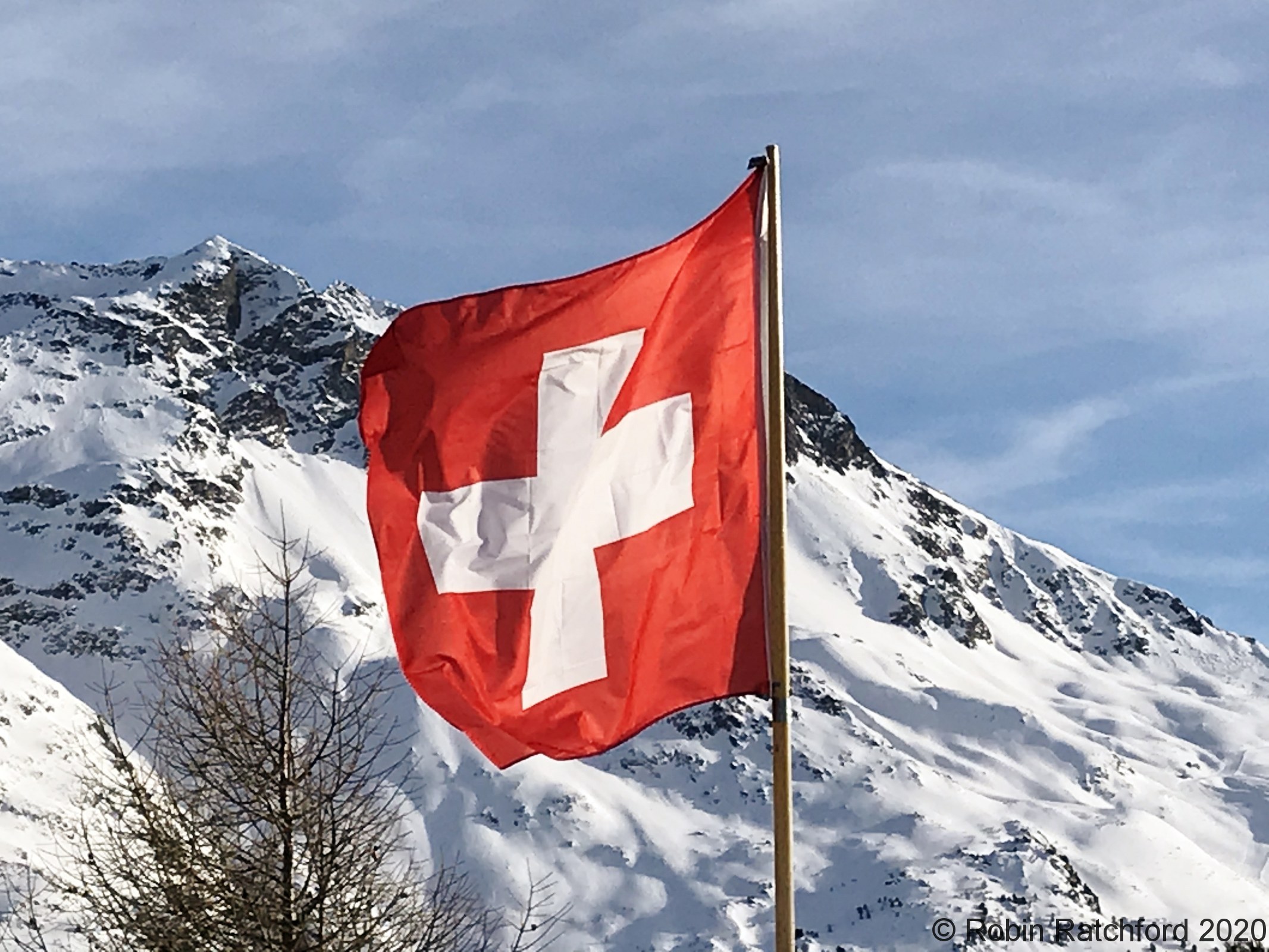 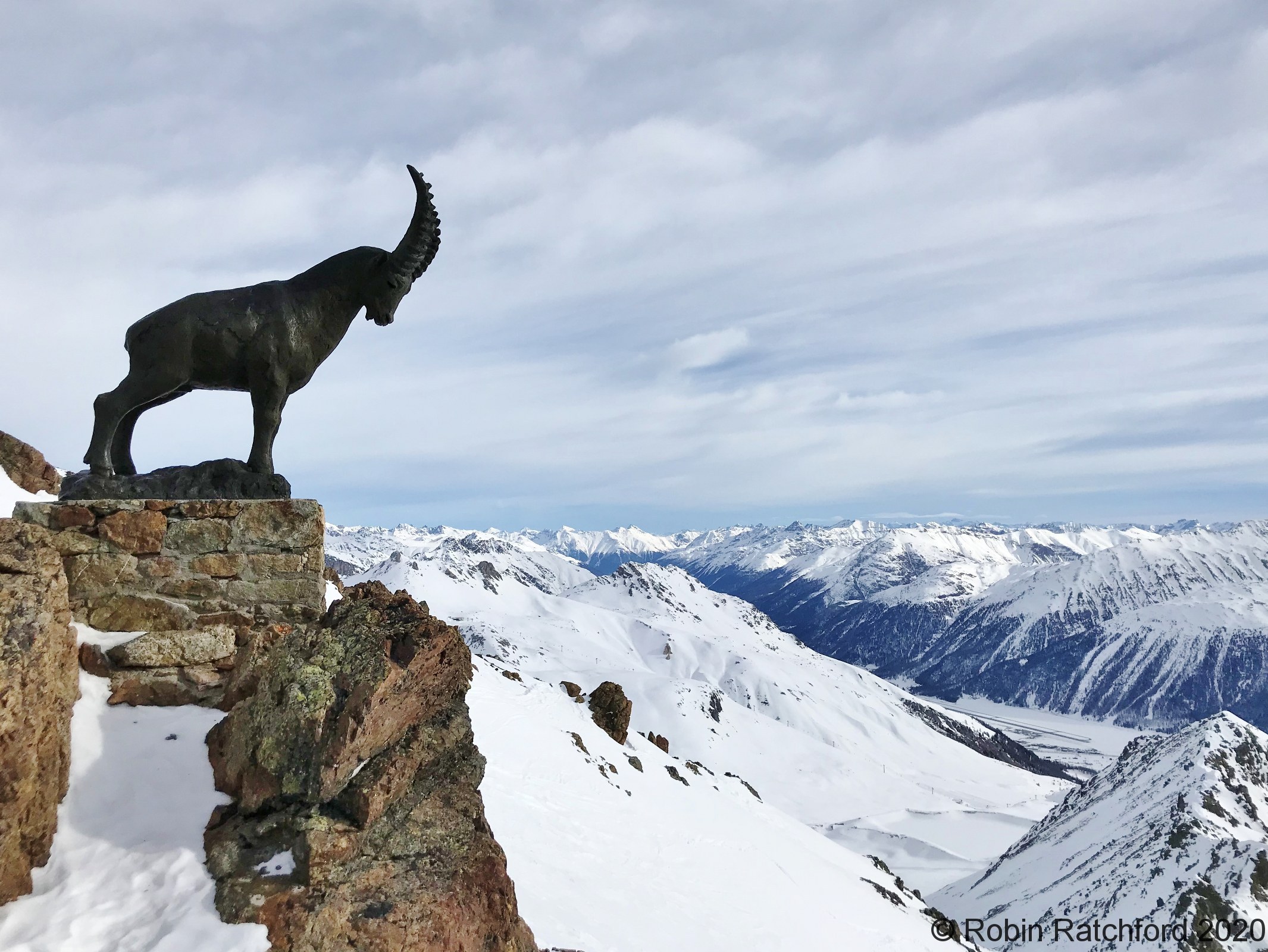 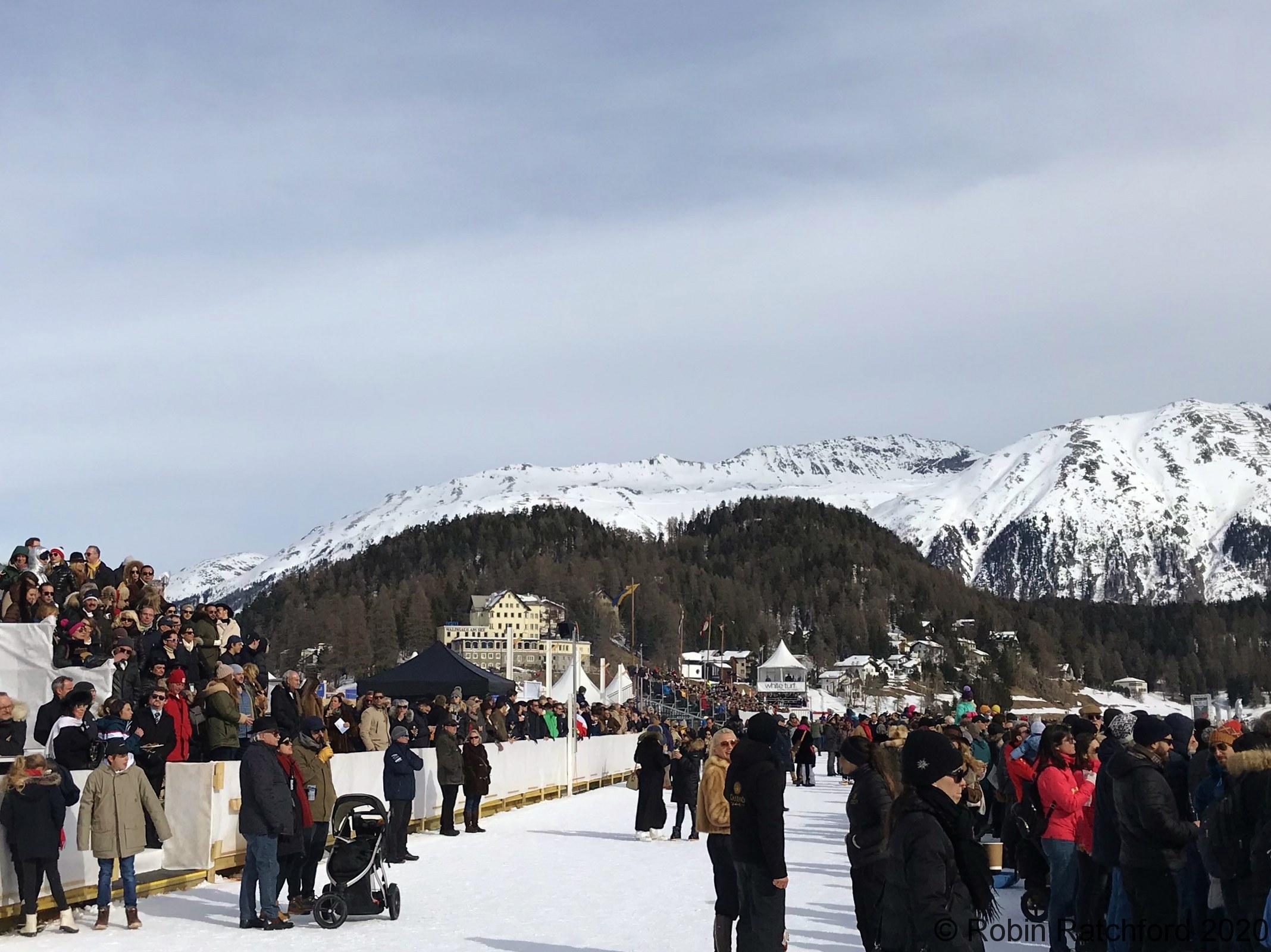 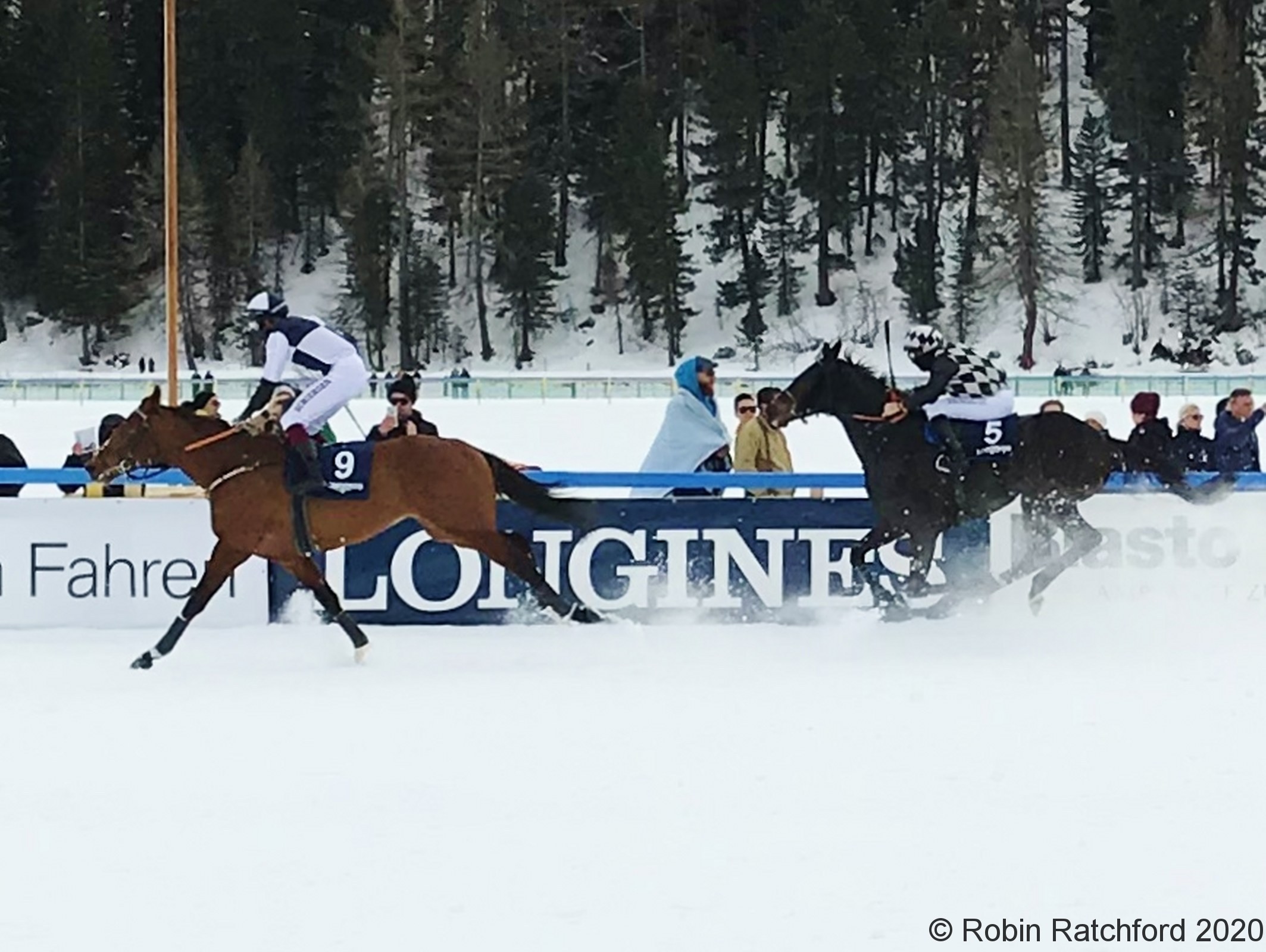 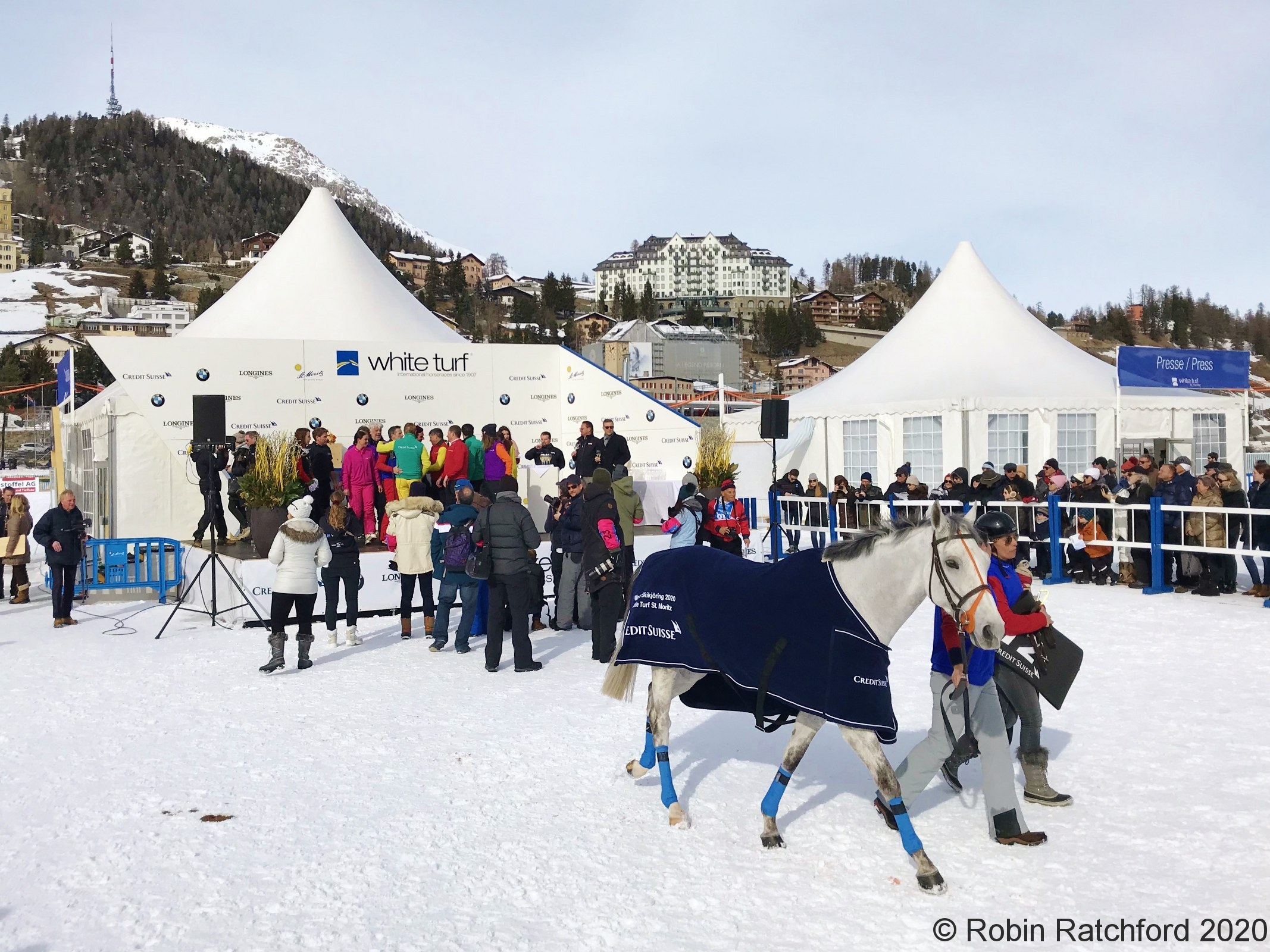 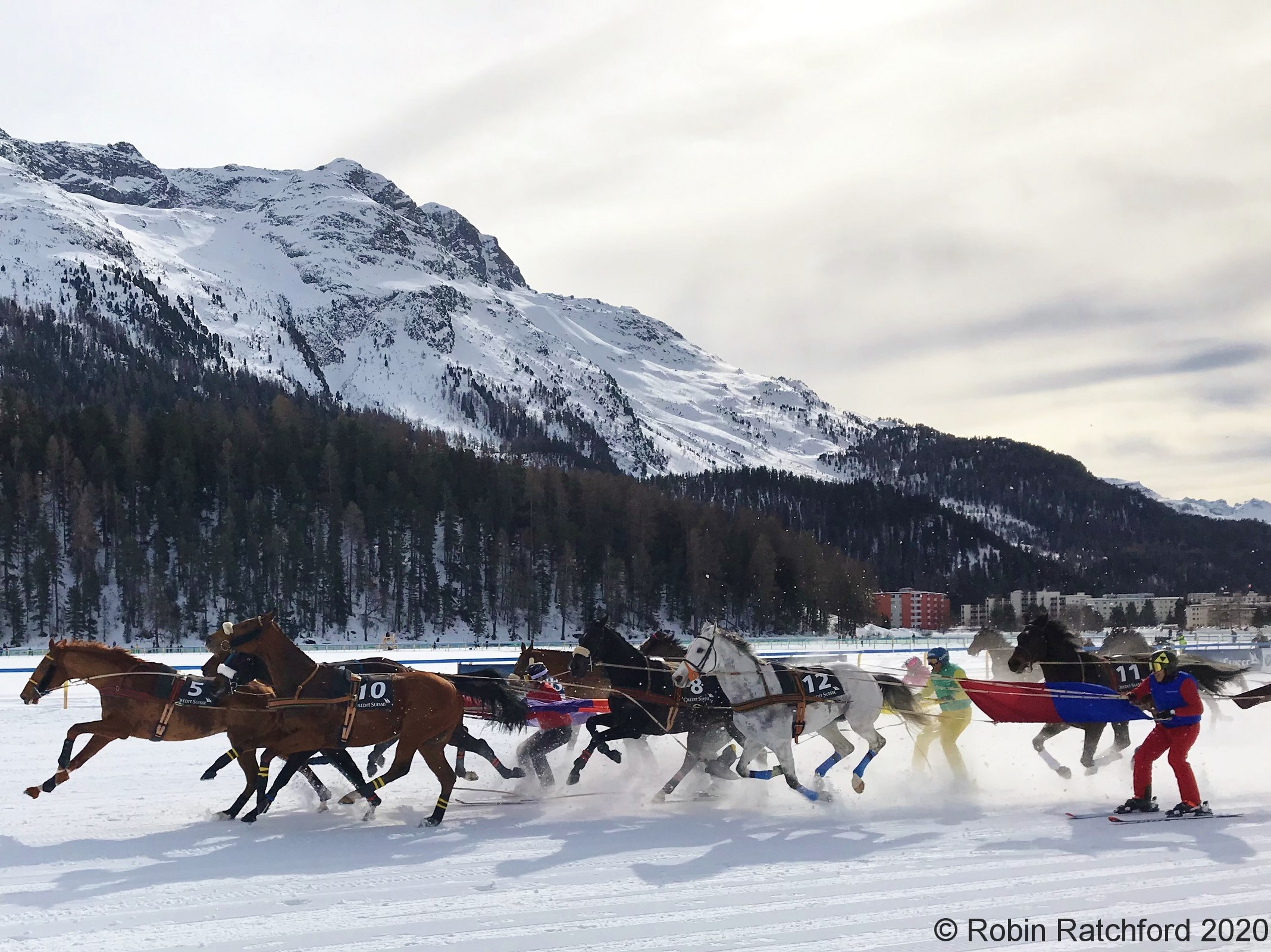 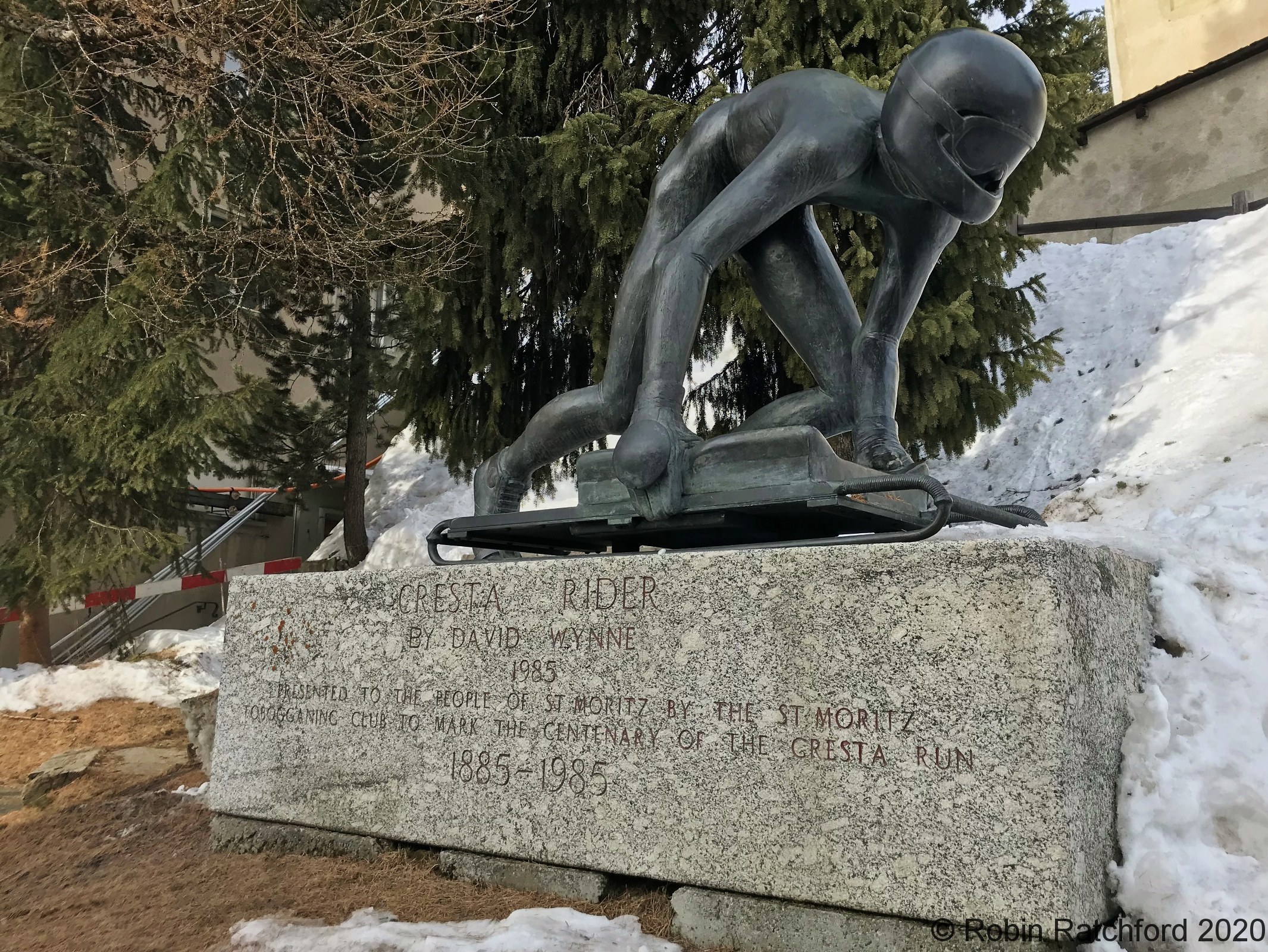 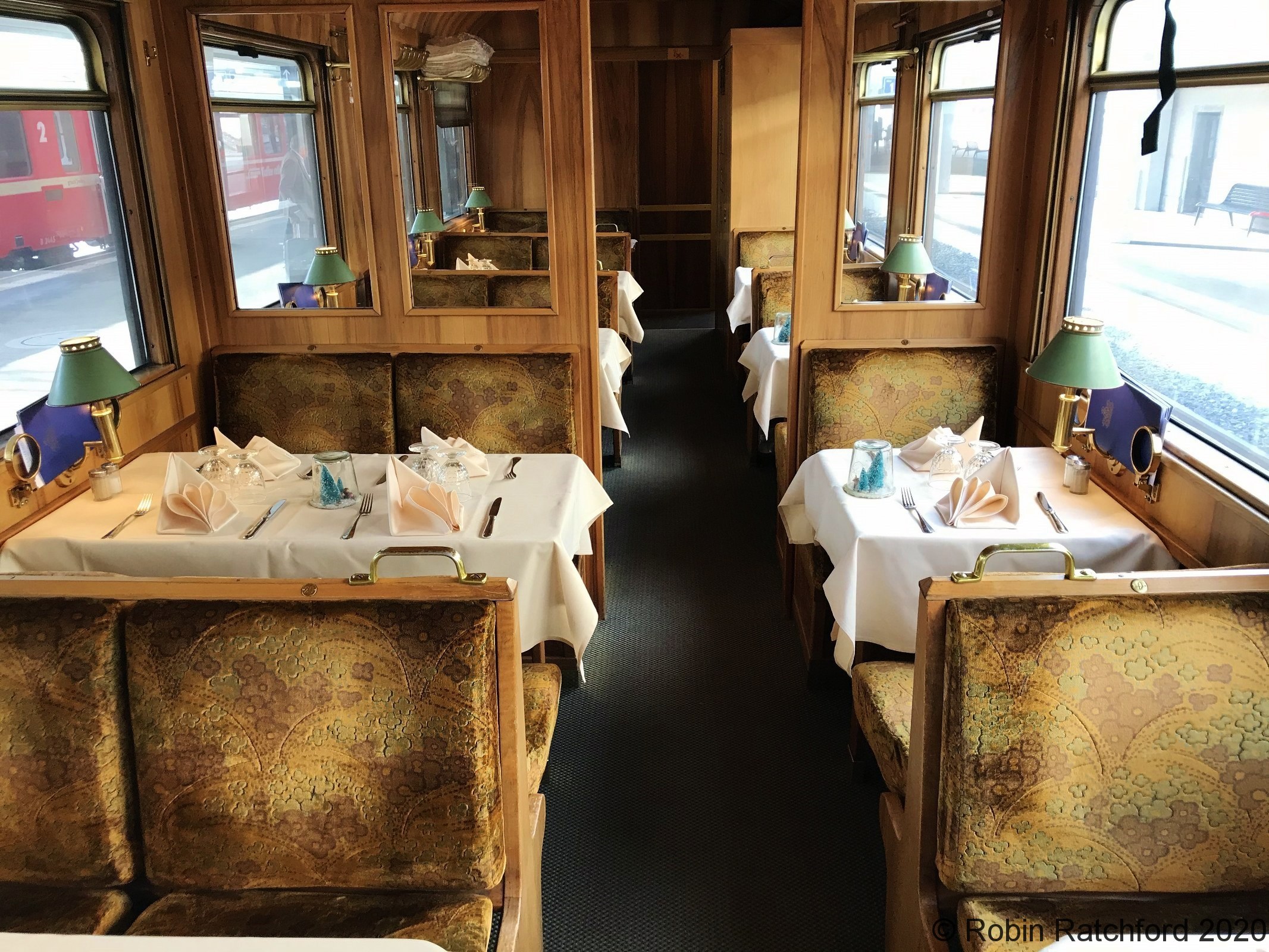 The event sees the appearance on the lake of a ‘village’ of white tents, covering 130,000 square metres.  It offers a wide range of attractions including live music, food and drink, roulette, and shopping opportunities for everything from a souvenir T-shirt to your own private jet.

In 2020, thoroughbreds from all over Europe ridden by international jockeys thrilled spectators from around the world.

At 1768m above sea level the frozen lake covers an area of some 78 hectares.  The ice is between 50-80 cm thick, below which the cold waters of the lake reach down to 44m.

To get to St. Moritz I took the Rhaetian Railway, which climbs over 1100m on its way from Chur to the Alpine village.

With 196 bridges and 55 tunnels the spectacular journey is a feat of engineering.  UNESCO has designated the route World Heritage.

As my train wound its way up through the mountains to St. Moritz I was surprised to see how little snow there was.

Rather than a uniformly thick coating of white there were large areas of ground with no snow at all and most of the trees were similarly bare. Climate change, it seems, is making its mark.

I wondered if the warmer weather would affect the thickness of the ice and began to imagine disaster movie-like scenes of it splitting open and horses, spectators and tents disappearing into the freezing waters below.

I did not need to worry, though.  The race organisers meticulously check the track with radar to ensure the ice is good and solid – safety is a top priority.

There are three types of racing at White Turf.

In the traditional flat races, jockeys gallop their horses round the circuit, cheered on by the crowds.  The horses’ hooves kick up clouds of powdery snow behind them as the animals charge along the course.

Trotting is where the horses pull a sledge-like cart occupied by a driver around the track.

But the most exciting has to be the skikjöring where unsaddled horses pull riders on skis along a 2,700m-long track at speeds of up to 50km/h.  Exclusive to White Turf, the skikjöring is the highlight of the event.

Strangely enough, the word skikjöring is Swedish and means ‘ski driving’ but I have not been able to find any explanation as to how the term came to be used in St. Moritz.

Skikjöring riders have to be strong, physically fit, good skiers and brave.  The race can be dangerous, with sometimes both riders and horses falling over together, as happened in 2016.

At this year’s event, three horses – including the one I had bet on! – lost their riders but continued running round the course.  Unfortunately, finishing first without your jockey does not count as a victory.

The rider who gets the most points on all three Sundays wins the title of ‘King of the Engadine’.  This year the title went to Adrian von Gunten with  his horse Zambeso.  An optician from the small Swiss town of Burgdorf, this was the fourth time von Gunten had won the award.

The total prize money at White Turf is about half a million Swiss francs, equal to about USD 520,000 or 480,000 euros, making it Switzerland’s most lucrative equestrian event.

White Turf is a highlight of the social and sporting calendar in St. Moritz.  Let’s hope that the ice on the lake stays thick enough for many winters to come!