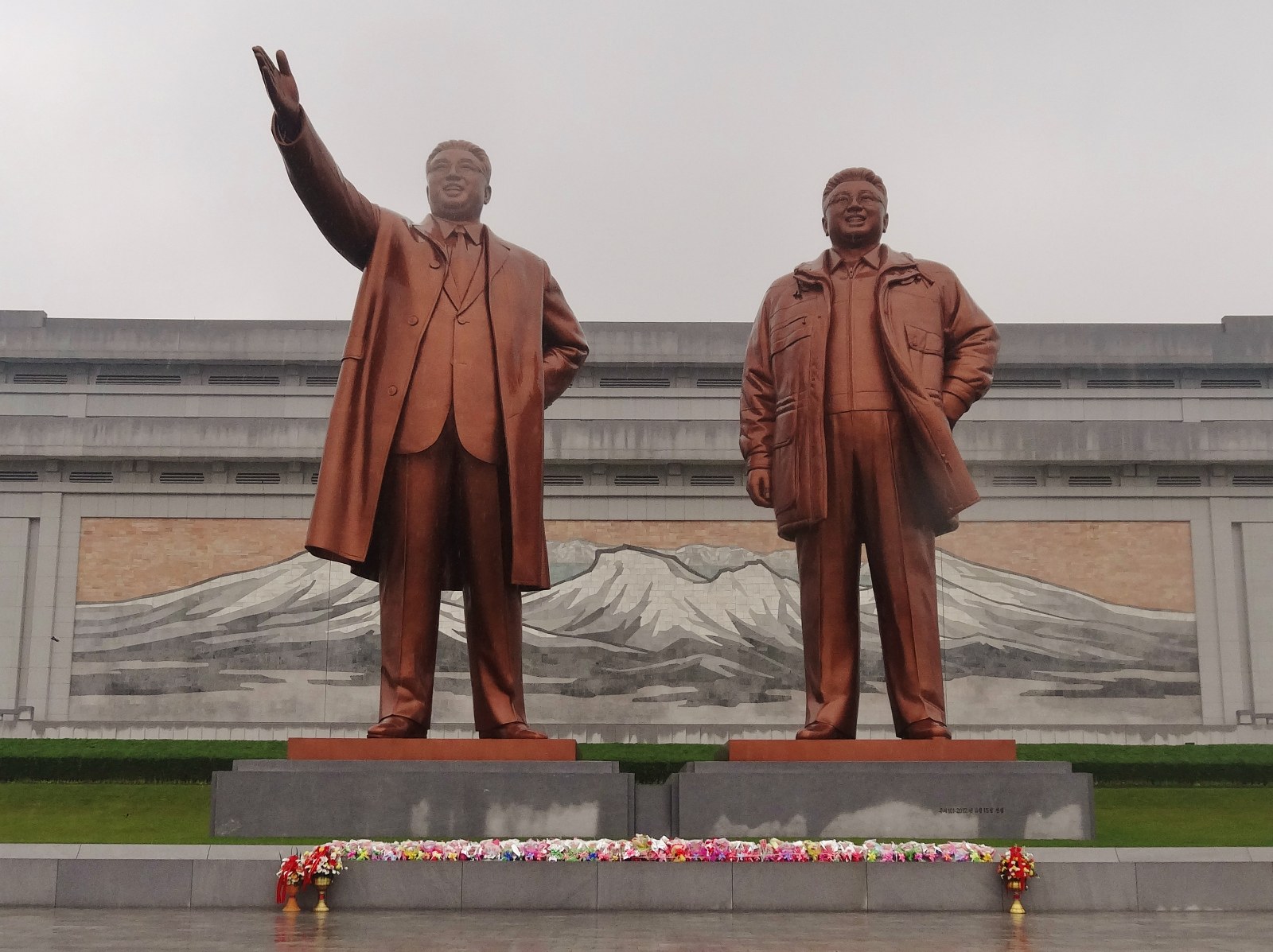 So, I’m just back from the so-called Hermit Kingdom, or the People’s Democratic Republic of Korea as it is officially known.

Stepping out of the Air Koryo Tupolev at Pyongyang Airport, I was met by a scene that could have come straight from some film depicting a stereotypical image of a drab dictatorship:  grey skies swirled overhead and rain fell relentlessly, as if on cue.  The awful Belgian weather I had hoped to leave behind had, it seemed, followed me half way round the planet to Pyongyang.

As I reached the bottom of the steps leading down to the tarmac, a smiling woman in a dark blue military uniform greeted me and handed me a large rainbow umbrella, her colleague then collecting it from me when I reached the shelter of the small airport building.

For the first couple of days the weather stayed grey and wet.  With its rows of apartment blocks, broad streets and much less traffic than we are used to, in some ways Pyongyang did indeed remind me of the old East Berlin.  But it was also much nicer than I had expected.

The broad Taedong River weaves its way through the city, as well as canals and other waterways lined with willows and poplars.  The city used to be known as Ryugyong or ‘capital of willows’; I began to understand why.  Yes, Pyongyang was surprisingly pleasant.  A metropolis full of concrete tower blocks, indeed, but also a city of tree-lined boulevards, parks and formal flower beds.

And the people walking along the streets seemed as cheerful as any one might see anywhere.  Children in black and white school uniforms and with red kerchiefs round their necks looked just as jolly as those on the many roadside mosaic murals I saw portraying smiling comrades rejoicing in the country’s achievements.

As one would expect, the city is generously endowed with monumental architecture.  A Triumphal Arch, a somewhat squarer version of its Parisian counterpart, and, of course, three metres higher, commemorates Korean resistance to their Japanese occupiers.

Everywhere, as if frozen in battle, towering statues of heroes of the socialist revolution – factory workers, farmers and cadres – stand atop plinths waving flags and exhorting the people to join them in the struggle against the imperialist aggressors.

On the banks of the Taedong, the 170m Juche Tower stands guard, a giant stone obelisk.  Dedicated to the concept of Juche, or self-reliance – a central pillar of North Korean thought – it is topped by an imitation flame which at night glows red in a sky dark enough to see the stars.

Some distance away on the other side of the river, the 105 storey Ryugyong Hotel – 25 years in the making – looms over the city like a giant rocket straight out of Flash Gordon, dwarfing all other buildings and looking as if it is ready to blast into space at any moment.

At night, the latest collection of city centre towers are lit up in lurid bands of red, green and blue.  Their glitzy appearance – from a distance at least – has earned them the nickname of ‘Dubai’ among the small expat community of diplomats and UN workers.

With the exception of a billboard extolling the virtues of the Peace Car – the product of a joint North-South venture produced in the border town of Kaesong – there is no advertising in Pyongyang.

Which is not to say there are no splashes of colour:  bright posters extolling the virtues of the revolution are everywhere, as are pictures of a smiling Kim Il Sung and his son and successor the late Kim Jong Il.  Giant statues of the same Kims – apparently in bronze – stand strategically on hills and in the many parks, pointing, pointing with outstretched arm…

As the rain eased off, I looked to see what they were pointing at and saw in the distance a rainbow shimmering faintly.