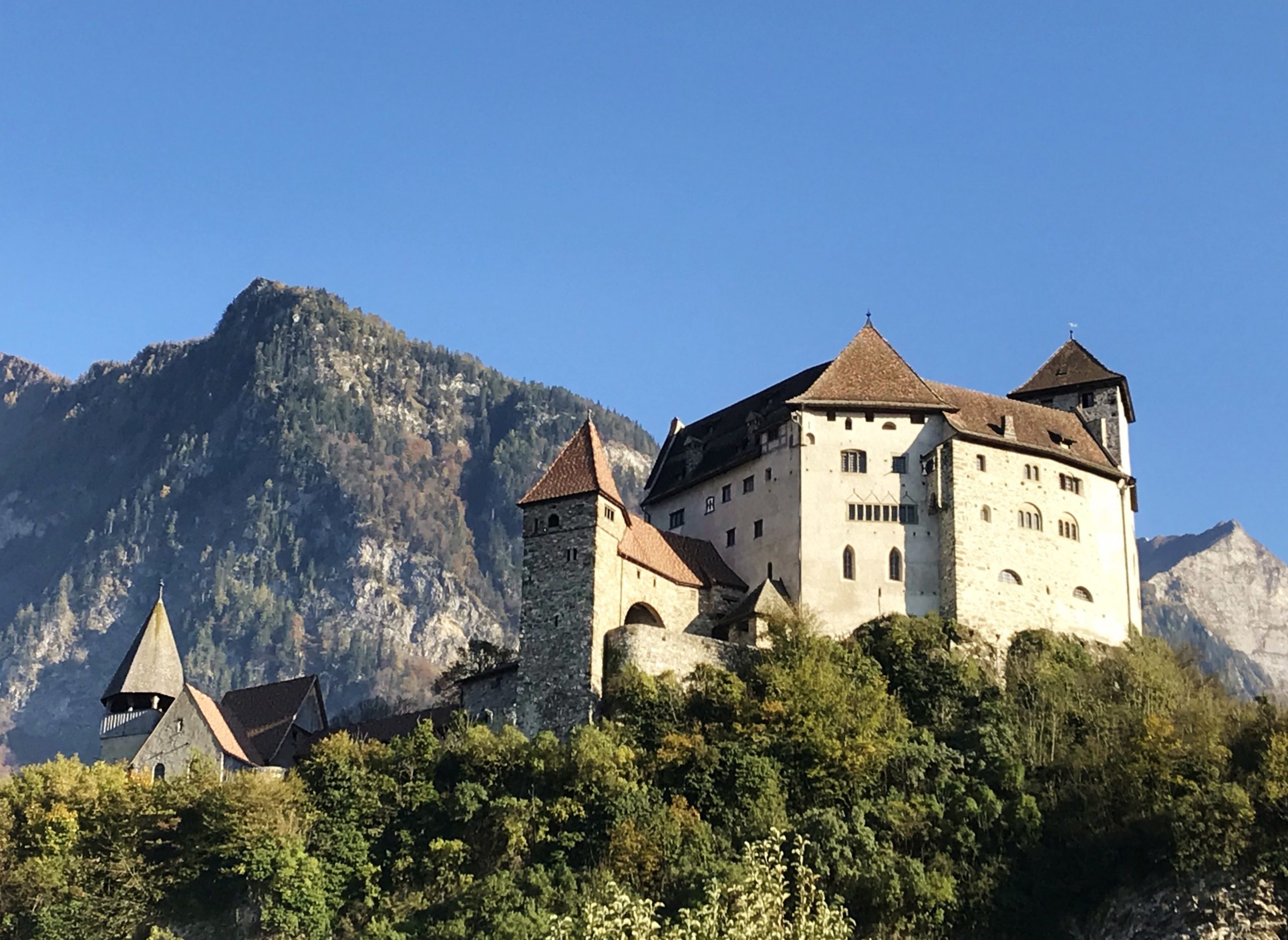 Looking like a set from a movie, Gutenberg Castle in Liechtenstein sits atop a steep hill above the small town of Balzers.

Together with Vaduz Castle – the residence of the country’s ruling Prince – it is one of only two of the principality’s five castles that have not fallen into ruin.

Yet the castle that today dominates the town beneath it has a rather unusual history.  And as well as having ‘film star’ looks, it has more than one connection with the silver screen. 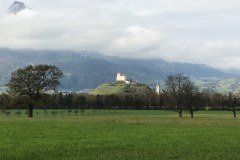 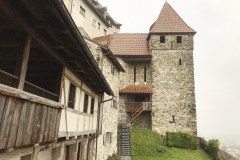 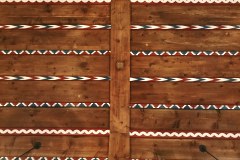 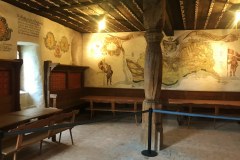 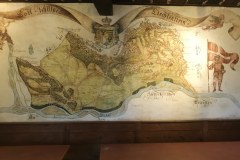 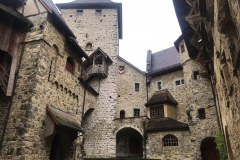 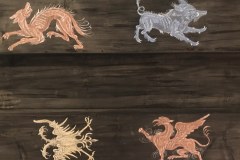 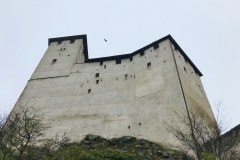 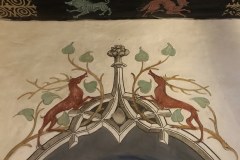 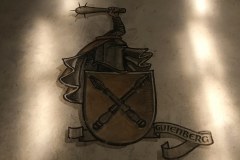 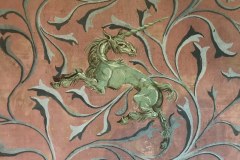 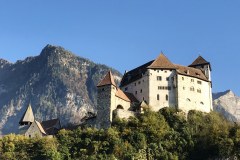 The 70m-high hill on which the castle stands provides a natural defensive point above the flat lands of the surrounding valley of the River Rhine.  Archaeologists have found traces of human settlement here dating back to the Stone Age.

In 1932, 10 bronze figurines of warriors, deer and wild boar were discovered during an archaeological dig.  The figurines were used in pre-Christian times during worship.  These ‘Gutenberg Statuettes’ are now on display in Liechtenstein’s National Museum in Vaduz.

The origins of the castle itself can be traced to the 1100s.  Initially, it belonged to the Lords of Frauenberg, a noble family from the neighbouring Swiss canton of Graubünden.

In 1314, it passed into the hands of the Habsburgs, the dynasty that ruled Austria and much of Central Europe until the end of World War I.

In the medieval period, the castle was a stronghold at the frontier between the Habsburg lands in Austria to the east and the Swiss cantons beyond the Rhine to the west.

At that time, wars between feuding powers in Europe were commonplace.  In 1499, during the Swabian War, more than a thousand Swiss troops besieged the castle, but were unable to capture it.

Looking up from down below to the castle perched on the hilltop, one can imagine how difficult it would have been to attack it – especially under a rain of arrows fired from the ramparts.

Today, neighbouring Switzerland is almost synonymous with neutrality, so it is strange to think of its soldiers once waging war with halberds, swords and canons.

By the 17th century, new, more powerful weapons and changes in the techniques of warfare meant Gutenberg lost its military value.

It remained lived in until the mid-1750s, but gradually fell into ruin.  As it was no longer a strategic asset, the Habsburgs in far-away Vienna decided it was not worth spending money on its upkeep.

So when in 1795 a fire swept through Balzers, the townsfolk hauled stones from the castle down the hill to rebuild their town, thus adding to the erstwhile fortress’ dilapidation.

In 1824, Balzers town council bought the castle from the Habsburgs only to sell it three decades later to Liechtenstein’s Princess Franziska.

But it was in 1905 that Gutenberg Castle got a new lease of life.

It was bought by Egon Rheinberger, a wealthy architect, sculptor and painter from Vaduz, Liechtenstein’s capital.  The new owner moved in with his wife and two sons and set about painstakingly rebuilding what was left of the castle.

It was Rheinberger’s sons, I am told, who discovered the little bronze figurines of the warriors and animals.

Typical for the period, Rheinberger rebuilt Gutenberg by drawing on elements of past architectural styles to create an idealised version of the castle.  So picturesque was his creation that it was used as a set in the 1934 film ‘William Tell’.

He added some new bits too, such as a chapel and a rose garden, and, being a businessman, opened a restaurant, complete with wall paintings of maps and mythical beasts.

After Rheinberger died in 1936, the remaining members of his family moved back to Vaduz.

Born in the hillside village of Triesen a few kilometres away, the actress moved to Hollywood in the 1930s.  She rose to fame in a series of Mexican movies directed by her husband.

In the ‘Emperor Maximilian Trilogy’ she played the Belgian-born Empress Charlotte, wife of ill-fated 19th-century Emperor of Mexico, Maximilian – who, as it happens, was also a Habsburg, the family who for centuries owned Gutenberg castle.

Hermine and Miguel lived in the castle until 1979.  It still includes furnishings, photographs and press clippings from their time there, providing another layer of history and an almost lived-in feeling.

Castle Gutenberg then became the property of the Liechtenstein state.  In 1993 it underwent further restoration.

Nowadays, in summer the castle is used for cultural events, such as concerts and plays, which are performed in the main courtyard.

Gutenberg is not open to the general public, but it is possible to arrange a private visit.

On my latest trip to Liechtenstein I was able to organise a tour of the castle.  My guide had close links with Liechtenstein’s National Museum and had also worked on archaeological digs around the castle.  Her detailed knowledge of the building and its history brought it to life.

As we entered the castle, any  misgivings I had about it being a Disney-style pastiche of a medieval stronghold quickly evaporated.

Far from detracting from the castle’s medieval origins, Rheinberger’s reconstruction and the story surrounding it, as well as the tale of its last occupants, actually made the place more interesting than I could have imagined.

Gutenberg Castle might look like a film set and even has a Hollywood connection, but it has an earthy feel to it and a history stretching back over 900 years.  If you should go to Liechtenstein, it is definitely worth a visit!

An Autumn Mystery – A true tale from the mountains of Liechtenstein