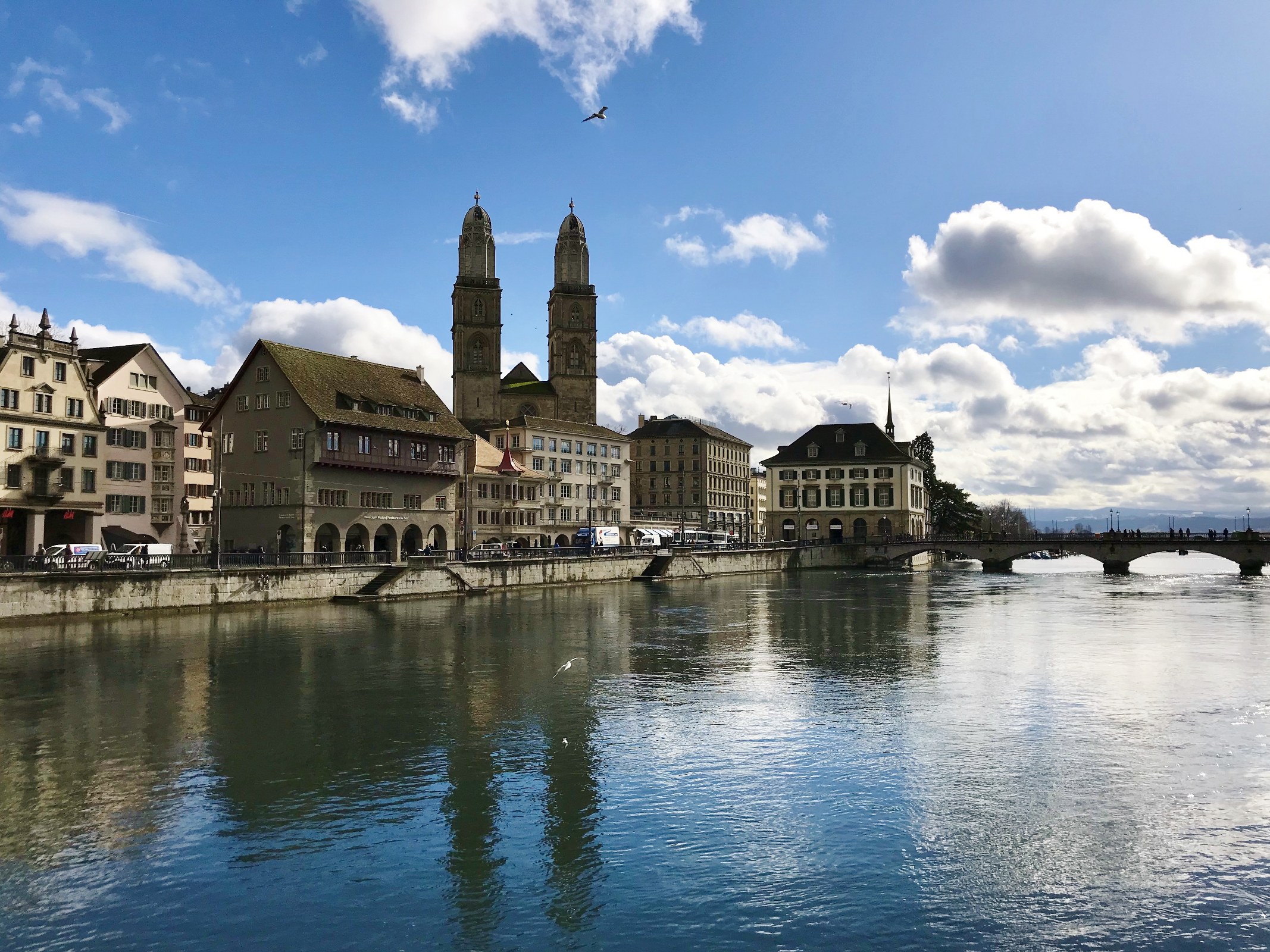 Zürich is Switzerland’s largest city.  It is often ranked among the most liveable cities in the world – and one of the most expensive.

Being both ‘most liveable’ and expensive sounds a bit of a contradiction.  What is it about Zürich then that makes it score so highly?

On my trip there earlier this year, I had the opportunity to find out.

When it comes to liveability, good transport connections count.

I flew into Zürich airport, Switzerland’s largest and a hub for the Star Alliance group that includes Swiss and Lufthansa.  I have passed through it many times on the way to more distant destinations, but this was the first time Zürich itself was my goal.

Switzerland is known for its excellent – and very punctual – railway network and Zürich is at the centre of it.  A 15-minute train ride to the city centre, followed by a seamless tram connection, showed the quality of Zürich’s public transport network.

The city’s location on the shores of sparkling Lake Zürich is also a major plus point.

The picturesque Old Town lies along both sides of the River Limmat, which flows from the north western corner of the lake and whose waters eventually join those of the Rhine.

The river is clean enough to swim in and apparently in summer people do, but when I was there it was too cold for any sane person to go for a dip.

The Old Town’s skyline is dominated by the towers of Grossmünster and Fraumünster churches.

Its winding hillside streets and alleys are fun to explore and a contrast to the chic boulevards of the neighbouring downtown area on the west side of the Limmat.

There the main thoroughfare, the Bahnhofstrasse, was laid out 150 years ago when the city walls were demolished and the ditch surrounding them filled in. Today, it is one of the world’s most expensive and exclusive shopping avenues.

The metropolitan areas counts some 1.8 million inhabitants.  Small compared to New York, Tokyo or London, Zürich is nevertheless a global financial centre and has many banks.

The city has a long history. The first permanent community here – Turicum – was a Roman fort and tax-collecting point.

Over the centuries, Zürich grew into a sizeable town.  In 1351, it became the fifth canton or area to join the Swiss Confederacy, a loose collection of independent states.

In the 1520s, it was the centre of the Swiss Reformation, the movement that created Protestantism.  Ulrich Zwingli, a preacher at the city’s Grossmünster cathedral, was its leader.

Zürich has played an important role in Switzerland’s story and between 1839-40 and 1845-46 was briefly its capital. For me, being surrounded by history is something that I would count as adding to quality of life.

Unsurprisingly, the city has a vibrant cultural life with numerous museums, such as the Swiss National Museum, several theatres, and a renowned opera.

It is also home to the Neue Zürcher Zeitung, one of the world’s best German-language newspapers.

As well as culture, quality of life surveys take into account things like housing, pollution, access to good health care and education, and levels of crime.  Zürich scores well on all of these.

And when it comes to eating out, going for a drink or shopping, the city on the lake has much to offer.  It does not come cheap, though – Zürich is second only to San Francisco for the highest average salaries in the world and prices reflect this.

‘Liveability’ rankings are not above criticism.  Objectively, some factors are important when it comes to quality of life, but others are more personal.

Whereas most people would value low levels of pollution and crime, for example, not everyone might think access to theatres or high-end restaurants essential.

And what about opportunities for excitement and adventure?  I have not seen these in liveability rankings.

By most measures, though, Zürich is an attractive place.

Traces of human settlement have been found in the area dating back 6000 years, way before the Romans arrived.  There were no banks then, of course, but the lake, the Limmat and the surrounding countryside clearly had their appeal.

My visit to Zürich was brief, so I cannot judge what it is like to live there.  I am certainly keen to return – perhaps in summer when the trees are in leaf and the street cafés are open.  And, if the waters of the Limmat have warmed up a bit and I am feeling adventurous, I might even go for a swim.