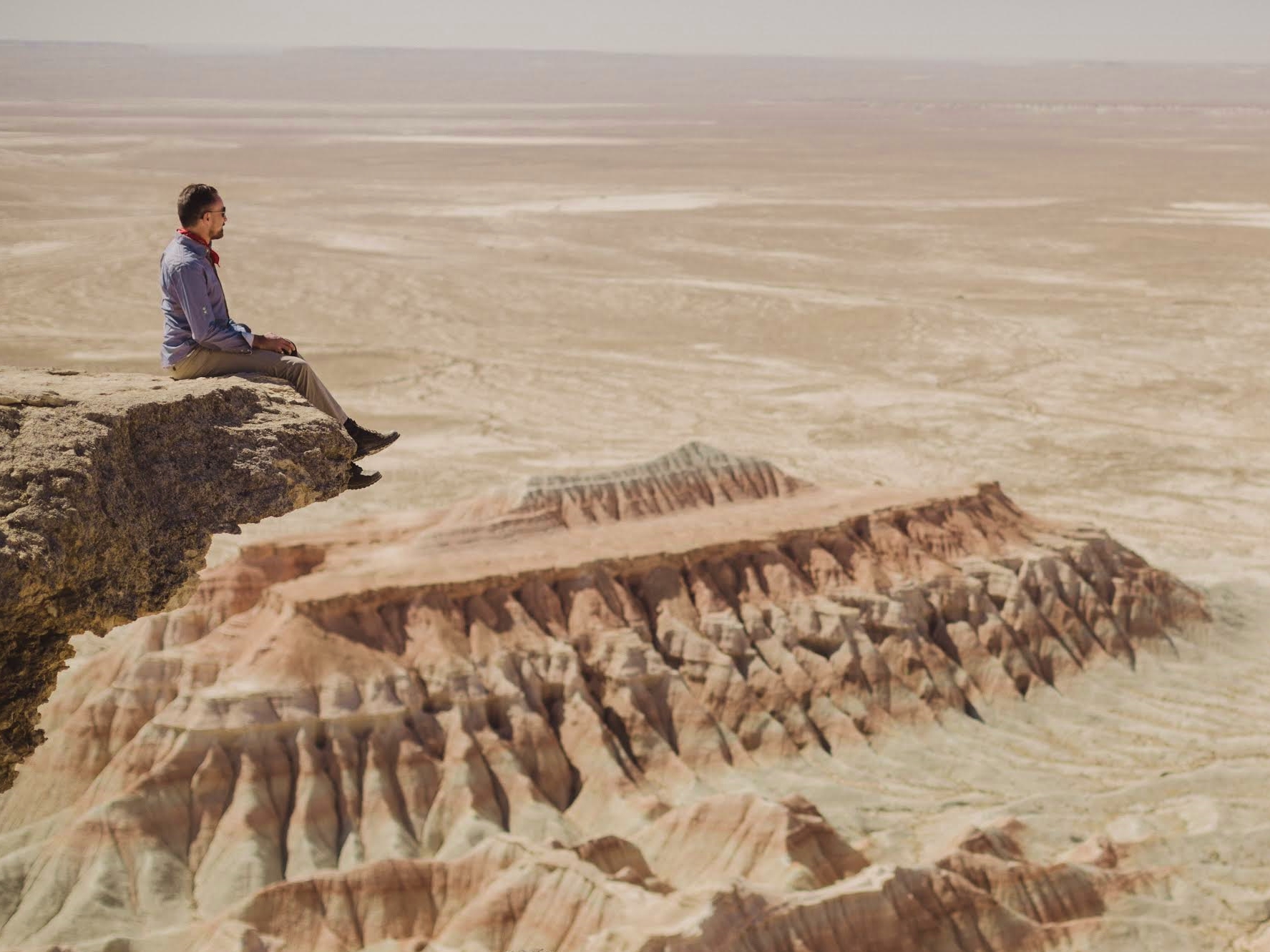 Turkmenistan is perhaps not at the top of everybody’s bucket list – indeed, it gets only 6,500 tourists a year – but it has a lot to offer the traveller looking for a trip with a difference.

From spectacular landscapes worthy of the best sci-fi movies to ruins of ancient trading cities, from its quirky, white marble capital to a flaming gas crater dubbed the ‘Gate to Hell’, Turkmenistan is nothing if not unusual.

Four fifths of this sparsely populated country are covered by the Karakum Desert.  It extends from the Caspian Sea in the west to the mountains bordering Iran and Afghanistan in the south and east.  Yet the Amu-Darya – the river the Ancient Greeks called the Oxus – and the Karakum canal irrigation system mean parts of Turkmenistan are lush and green with fields of cotton, watermelons, tomatoes and other crops. 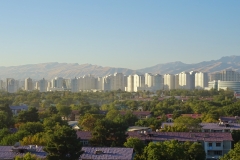 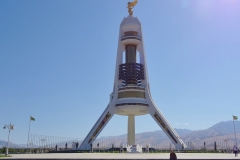 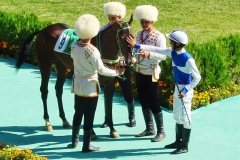 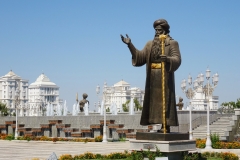 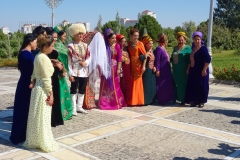 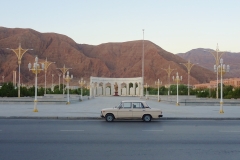 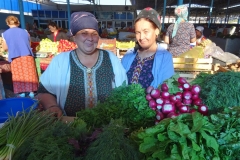 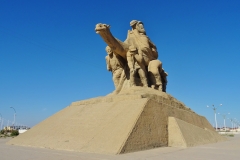 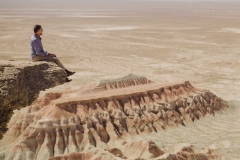 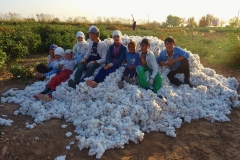 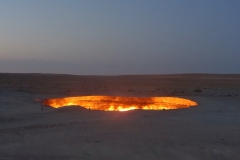 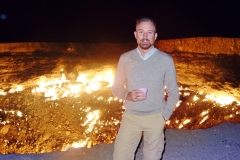 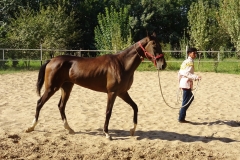 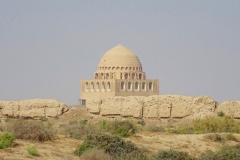 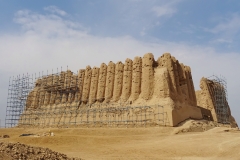 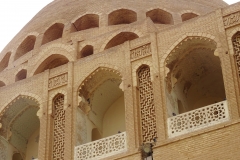 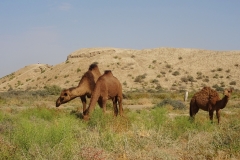 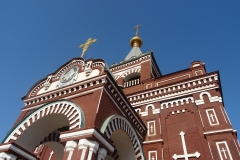 The country of five million people gets its name from the Turkic-speaking tribes who moved here in the eighth century from Mongolia.  Horses were an important part of their culture.  They still are today, with the famous Akhal-Teke horses, known for their speed and distinctive metallic sheen, a national emblem.

Parts of modern-day Turkmenistan lie on what was once the Silk Road, the medieval caravan routes linking China with Europe and the Middle East.  Numerous cities along the trade routes – often sited at oases – flourished under successive empires.  The greatest of these was Merv.  In its golden age in the 12th century it grew to become briefly the largest city in the world, with over one million inhabitants.  Arab and Persian geographers called it ‘the mother of the world’.

Although the area around Merv was first settled in the Bronze Age some four thousand years ago, it was not until the 5th century BC that the Persians founded a city at the oasis created by the inland delta of the River Murgash.  Legend has it that Alexander the Great and his armies passed through in the 4th century BC.  Whether or not the young warrior king actually set foot in the city, he incorporated it into his empire and renamed it Alexandria.

The city grew, with subsequent rulers adding ever more extensive defensive walls.  Like many places in Central Asia, Merv fell victim to Genghis Khan and his Mongol hordes.  When in 1218 the Khan sent his messengers to demand that the city pay taxes to him and surrender its most beautiful women, Merv’s ruler had them killed.

Three years later, Genghis Khan’s son Tolui arrived at the head of a great army.  The inhabitants negotiated their surrender in the belief they would be spared, but when they opened the city’s gates Tolui’s soldiers poured in and slaughtered every last one of them.  The city’s capture was one of the bloodiest in history.

Although rebuilt, Merv never regained its former glory and gradually fell into ruin.  Today, little remains of this erstwhile centre of commerce and learning.  Like the surrounding Turkmen territory, it became part of Tamerlane’s empire, before falling under the rule of the khanates of Khiva and Bukhara, now in neighbouring Uzbekistan.

In the late nineteenth century the lands of the nomadic Turkmen was incorporated into the Russian Empire, eventually becoming part of the Soviet Union.

Turkmenistan has the world’s fourth largest reserves of natural gas and Niyazov used the country’s huge revenues to rebuild the capital Ashgabat with Italian marble and to populate it with shining golden statues of himself.

Today, the rather attractive desert city is in the Guinness Book of Records as having the most white marble buildings – over 500 in total – many in a distinctive style.  It also holds the record for having the world’s largest indoor Ferris wheel…

Some of Ashgabat’s 1950s Soviet-style four-storey apartment blocks – built after the city was reduced to rubble by an earthquake in 1948 – still stand, their crumbling, concrete walls partly hidden by the many plane trees that line the capital’s streets.

Niyazov also replaced the Cyrillic alphabet with a new Turkmen one based on the Latin alphabet.  The president famously wrote the Ruhnama (The Book of the Soul), a book intended to be the “spiritual guidance of the nation”.  Reading it became mandatory in schools, universities and government offices. Civil servants were tested on the book at job interviews and even the driving test had questions on it.

When Niyazov died in 2006 he was succeeded by the country’s current ruler, Gurbanguly Berdimuhamedow.

Berdimuhamedow has largely continued the policies of his predecessor, but has had many of the golden statues of Niyazov discreetly removed or shifted to less prominent positions.  The centres of most Turkmen towns now host glittering public buildings even if everyday life seems locked in a simpler past.

In 2009 the president launched the building of Awaza, a glittering new resort town on the Caspian Sea coast intended to attract tourists from far and wide.  In the short high season, Awaza is apparently popular with Turkmen and Russians, though when I visited it was virtually empty.

Perhaps Turkmenistan’s most unusual attraction is the flaming gas crater at Darwaza, deep in the Karakum Desert.  Known as the Gate to Hell, it was created in 1971 when the ground collapsed into an underground cavern, releasing poisonous methane gas.  Some claim Soviet geologists set the gas on fire to prevent it spreading.  They expected it to burn off after a few days, but it is still ablaze today.

Rumour has it, however, that the government wants to put the fires out; seeing this extraordinary feature while it still lasts was one of the reasons why I wanted to visit Turkmenistan.  When daylight fades, the 70m-wide crater takes on a golden glow, gradually turning orange as night falls.  Peering over the edge into the abyss below was rather like looking into Mordor in the Lord of the Rings.  Yet, despite its many strange attractions, this was no imaginary land – this was Turkmenistan!