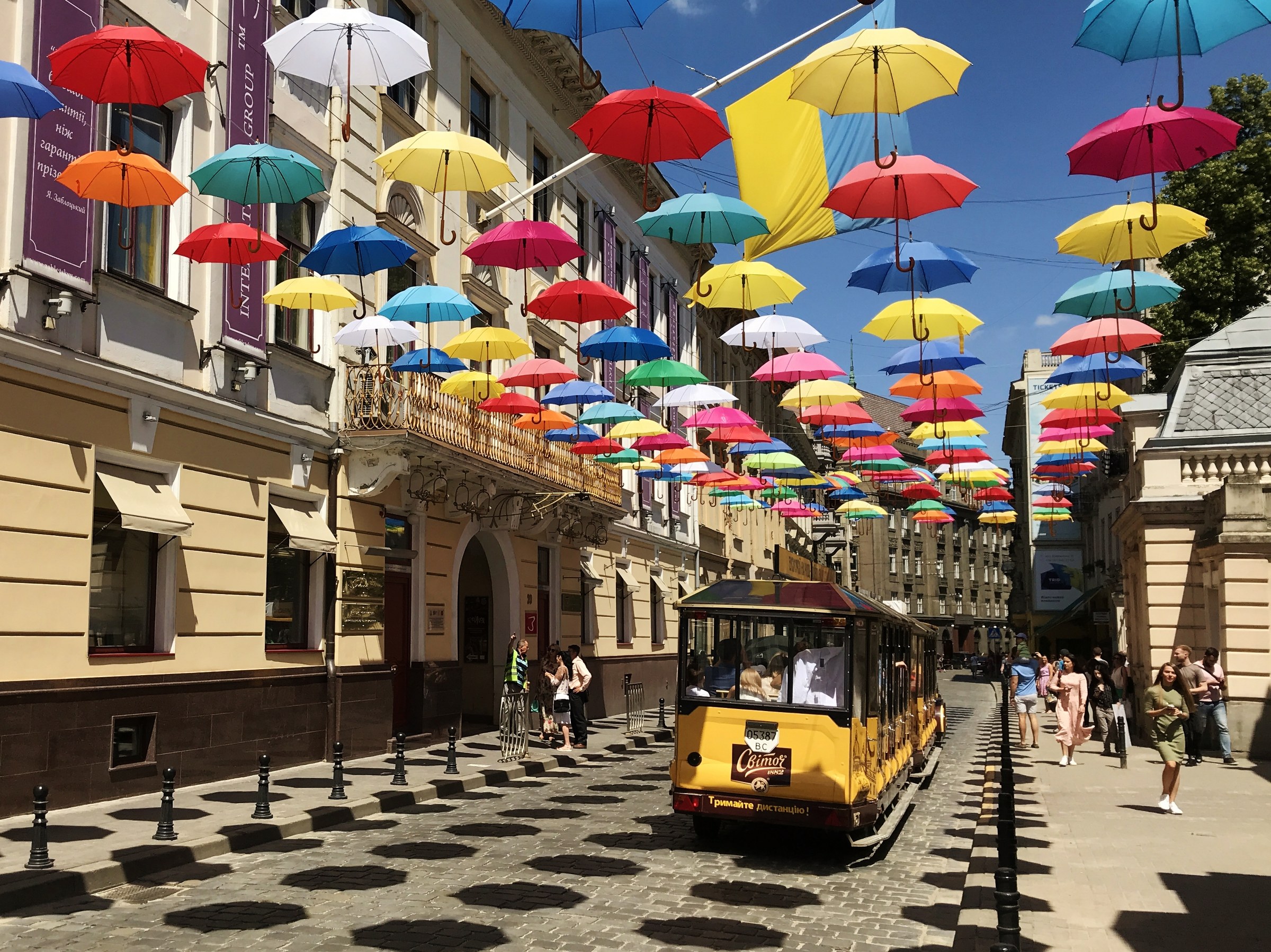 L’viv, Lwów, Lemberg, Leopolis – four names for a single city, the largest one in Western Ukraine.  L’viv – the name its inhabitants currently call it – has a long and rich history.

Yet it is not on most people’s A-list of European cities to visit, which is a pity because this colourful and welcoming city has much to offer the visitor.  But the upshot is that, unlike Europe’s ‘hot spots’, L’viv is not bursting at the seams with tourists.  L’viv is a city you can come to and really enjoy.

Archaeologists have traced human settlement here back to the 5th and 6th centuries.  In the 13th century a castle was built on the hill that dominates today’s city and a town began to develop around it.  The city was officially founded in 1256 by King Danylos of Galicia, who named it in honour of his son Lev.

Lev means lion.  The Latin version, leo, is the origin of the city’s Latin name Leopolis and the English word Leopolitan, meaning from L’viv.

The city grew and the main square and the streets around it – which still exist today – were laid out on the lowlands below the castle hill. 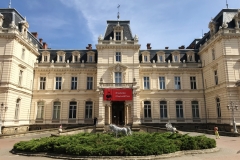 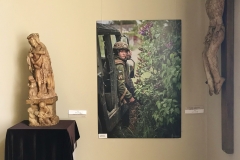 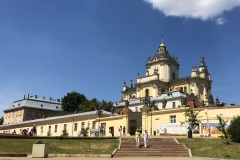 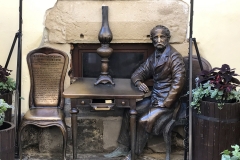 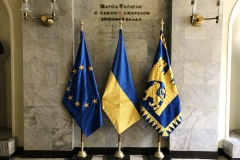 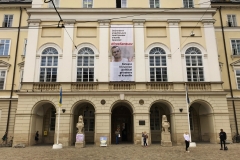 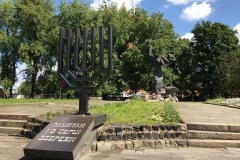 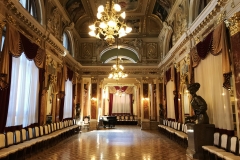 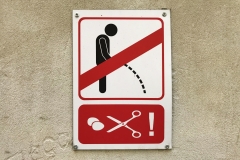 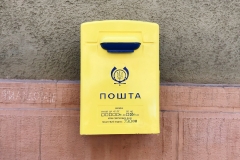 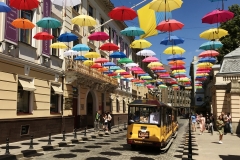 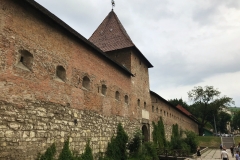 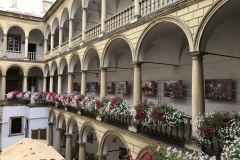 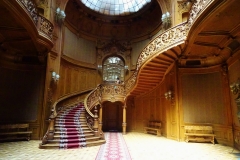 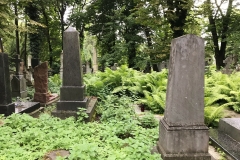 Situated at the crossroads of east-west and north-south trade routes, L’viv was for many centuries a flourishing administrative and religious centre.  Its importance as a commercial hub attracted many different ethnic groups. Over the years, Armenians, Poles, Germans, Hungarians, Tartars, Jews, Greeks, Moldavians and Ruthenes settled in the city, making it a cosmopolitan melting pot and centre of culture.

The city’s diversity can be seen in the buildings that have survived from times past, including not only Orthodox, Armenian and Catholic churches, but also a mosque and a last remaining synagogue, the others having been destroyed by the Nazis.

The city’s heritage is reflected in its fine architecture, including medieval, Renaissance, Baroque and Ukrainian secessionist.  The old centre around Ploshcha Rynok – the city’s main square – is almost intact and is classified as a UNESCO World Heritage Site because of its ‘Outstanding Universal Value’.

Control of the city has switched several times between the surrounding powers.

For centuries it was part of the vast Polish-Lithuanian Commonwealth – the Rzeczpospolita – and known by its Polish name Lwów.  When in 1772 Austria, Prussia and Russia started carving up Poland between them Lwów was absorbed into the Austrian Empire.

The city was renamed Lemberg and became capital of the Kingdom of Galicia and Lodomeria, the Habsburg Empire’s most easterly province.

During this period, many prestigious buildings, such as the opera house and the palace of Prince Potocki, were built, reflecting the city’s new status.

When the Austro-Hungarian Empire collapsed at the end of the First World War, the city was briefly the capital of the short-lived West Ukrainian People’s Republic and again called L’viv.  The new country existed for only nine months.

To the north, Poland had been restored and was keen to reclaim the lands that had for centuries been its own.  Following defeat in the Ukrainian-Polish War, L’viv and surrounding area became part of Poland again and the city’s name reverted to Lwów.

During the Second World War, the city changed hands no less than eight times between the Germans and Soviets.

Yet, miraculously, it largely escaped the physical destruction wrought on so many other European towns during that period.  Its people were less fortunate, though.

The city’s large Jewish population was not spared the horrors of war.  They were herded into a ghetto from where many were taken by train to extermination camps.  In total, 136,000 of the city’s Jewish inhabitants were killed.

At the end of the war, L’viv was incorporated into the Ukrainian Soviet Socialist Republic, part of the Soviet Union.  Continuing his wartime mass deportations from Galicia, Stalin forcibly moved many ethnic Poles from L’viv to within Poland’s new, post-war borders.

In their place he brought in Russian-speaking Ukrainians from the east of Ukraine and Russians from elsewhere in the Soviet Union.  L’viv’s erstwhile cosmopolitan population was replaced by an overwhelmingly Ukrainian and Russian one.

When in 1991 the Soviet Empire collapsed, the city found itself in the newly independent Ukraine.

L’viv’s centuries-long history as part of Poland and Austria-Hungary has bequeathed it with a distinctly Central European architectural heritage.  The main language is Ukrainian and the people are Western oriented, in contrast to the eastern reaches of the country, where more people speak Russian.

With its old houses painted in various colours, the city’s historical centre is very appealing.  The clock tower of the town hall dominates the skyline and from the top there are excellent views across the rooftops and church spires.

In summer the Ploshcha Rynok and the surrounding streets are full of café terraces.  People watch the world go by, while drinking a city-brewed beer or wine from the south of the country.  In the evenings, a glass of cherry brandy – a local speciality – might be the drink of choice.

L’viv also has a strong tradition of coffee houses and cafés.  Indeed, it was actually a Leopolitan – Yuri Kulczycki – who opened the first coffee house in Vienna.

Kulczycki was a Cossack who had discovered the delights of coffee houses whilst held captive in Turkey.  When the Ottoman armies laid siege to Vienna in 1683, Turkish-speaking Kulczycki sneaked through enemy lines disguised as a merchant and persuaded the Poles to come to the rescue.

As reward for his bravery, Kulczycki asked for no more than the sacks of green beans that the fleeing Turks left behind.  And so began the story of Viennese and Leopolitan coffee houses.  Today, the aroma of roasting beans and freshly brewed coffee floats through the city’s streets.

As a university town, L’viv has a large student population which lends it a particular vibrancy.  It also attracts tourists, mostly from other parts of Ukraine and Poland.  Unlike many other cities in Central and Eastern Europe, L’viv has not yet been overrun by hordes of tourists.  Nor has it become a target destination for stag and hen parties.

The people of L’viv were welcoming and friendly and demonstrated a special sense of humour.  Amusing signs around the town or practical jokes in restaurants seemed par for the course.  The city was also spotlessly clean.

I got a nice insight into life here when riding a crowded tram.  A lady tapped me on the shoulder and passed me a 5 hryvnia banknote.  Seeing I looked puzzeled, she nodded to indicate I should pass it on.  The bank note was passed entire length of the tram to the driver, who issued a ticket in exchange.  The ticket took the ‘return journey’ all the way back down the full tram to a woman standing at the back and who had been able to squeeze through to buy her ticket.

If you are looking for a great place to visit for a few days, come to L’viv – you will not be disappointed!