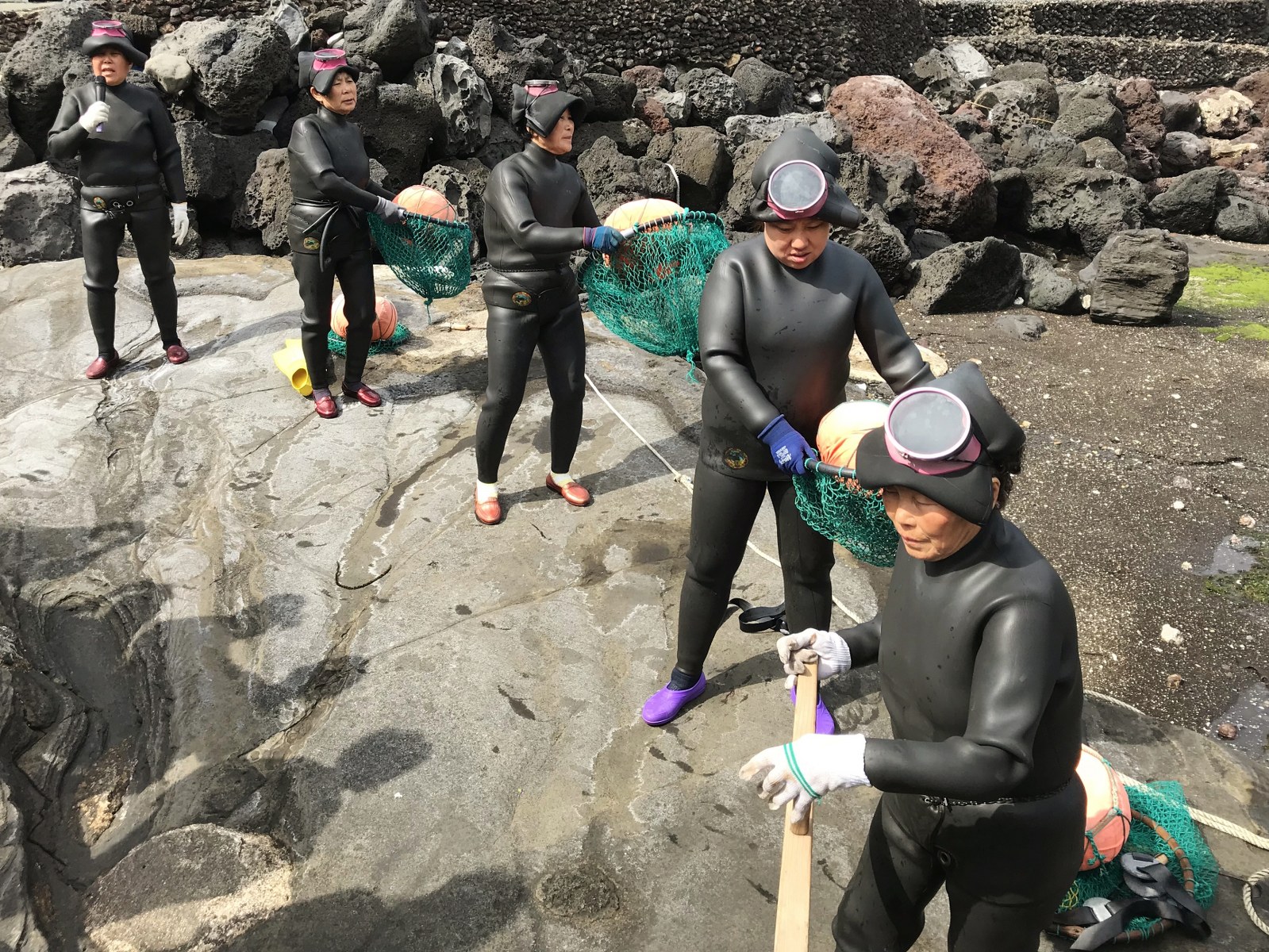 The female divers or haenyeo of Jeju are part of the South Korean island’s rich history.

In 2016, UNESCO added the haenyeo to its list of intangible cultural heritage of humanity. Yet, unless things change, the haenyeo might soon be a thing of the past.

For centuries, they have dived in the waters around the island to gather shellfish, octopuses, sea urchins, sea cucumbers and abalone, as well as seaweed.  Without using oxygen masks, the women – some into their 80s – dive up to 10m under the sea.

The haenyeo work up to seven hours a day, three months of the year.  Before diving, they sing and offer prayers to Jamsugut, the goddess of the sea, in hope of a good catch and returning safely.

Using no breathing equipment, the women hold their breath when diving and make a special verbal sound when they come back to the surface.

Jeju’s diving tradition began in the 5th century AD.  For many centuries, it was only the men who dived but in the 17th century women began diving too.

It is not known exactly why but gradually the number of women divers grew until they outnumbered their male counterparts.

One theory, is that many men died in wars or while deep-sea fishing; another is that women can cope better with diving in cold water because they have more subcutaneous fat than men do.  Today, all Jeju’s haenyeo are women.

The haenyeo’s communities developed to become semi-matriarchal because many families relied on the sale of the shellfish for most of their income.  In a reversal of traditional roles, men paid a dowry to their bride’s family.

The haenyeo are renowned for their independent spirit.  Their knowledge of the sea and diving is passed from mother to daughter.

The divers are divided into three groups depending on how much experience they have:  hagun, junggun and sanggun.  As the most experienced, the sanggun give advice to the others.

Girls would start their seven-year training at the age of 11.  The oldest haenyeo are over 80, which means that they have been diving for over 60 years.

In the past, haenyeo wore cotton swimsuits.  In winter, they could only stay in the cold sea for an hour.  They would then dry off and sit in front of a fire for a couple of hours to get warm again before going back into the water.

Today, the haenyeo wear wetsuits and masks and can stay in the sea for up to six hours.

When the women dive they take with them an L-shaped hoe to collect their catch and a net, attached to a float, in which to store their harvest.

As Korea’s economy rapidly developed and tourism surpassed agriculture as the mainstay of Jeju’s economy, many haenyeo swapped diving for more comfortable jobs.

The Jeju island provincial government sees the haenyeo as representing the island’s character and people’s spirit.  This has raised the haenyeo’s status and they have become one of Jeju’s treasures.

It has also drawn attention to the sustainable nature of their fishing with its eco-friendly methods.

In 2003 a museum dedicated to haenyeo was opened.  Through photographs, dioramas and various objects used by haenyeo it details the history of the divers through the ages.

Today, nearly all the haenyeo are over the age of 50.  Younger women are more attracted to working in offices than diving into icy waters.

With so few new recruits, it is difficult to see how it will be possible to keep the tradition alive. Soon, the museum might be all there is left to remember the haenyeo by.

South Korea – Land of the Morning Calm, Country of Contrasts